With the new contract for CUNY faculty approved this past week by a wide margin, and adjunct faculty continuing to voice their grievances with its failure to meet many of their demands, including a $7,000 minimum per three-credit course, another group feels increasingly left out of the fold.

College Lab Technicians, known as CLTs, are the lowest rung on the faculty ladder, coming behind adjuncts, and HEOs (Higher Education Officers, who operate as office assistants). CLTs do most of the jobs that go unnoticed by students and other faculty alike.

“We are the behind-the-scenes portion of the academic experience,” said Michael Irgang, a CLT in BC’s film department responsible for the equipment room where students rent out film gear for projects. “We fill the gaps.”

Irgang is one of many CLTs, specifically in the arts departments (Which most of the CLTs are a part of, the others are mostly in the sciences) who have begun working to bring more attention to the CLT struggles with pay equity, work load, and their overall perception around campus.

“Students don’t know all the work that goes on outside the classroom,” said Ed Coppola, a Chief CLT in the art department responsible for the photography equipment and has been here since the 1980s. CLT has become a catch-all term for all of that behind-the-scenes work, and varies from department to department.

“Every CLT has a very different job,” said Coppola’s art CLT colleague, Stephen Margolies, who works specifically for the art history section of the department and his been working in that capacity since 1969. (Now 83, Margolies is among the oldest and most tenured of all CUNY faculty.) When Margolies got to BC, his job was as “curator of slides,” where he compiled projector slides of famous artworks. Now that part of the  job is covered by a Google Image Search.

The jobs can get even more specific in different departments. For instance, Zeno Wood, one of the Music Conservatory’s two CLTs, is responsible for maintaining and tuning the college’s 100 or so pianos, harpsichords, and other keyboard instruments. “It is insane how specific it is,” he said of his rather unique job on campus.

Although the jobs seem rather specific, this has opened the door for a certain vagueness in the CLT job description, and CLTs have increasingly wound up working out of title. For instance, many of them wind up inadvertently teaching students (although some CLTs do also work as adjunct professors), budgeting, cleaning, and writing for grants.

About 25 years ago, Stephen Margolies raised a quarter of a million dollars for a guest-speaker program for the department, a duty he said he never even heard as much as a thank you for. 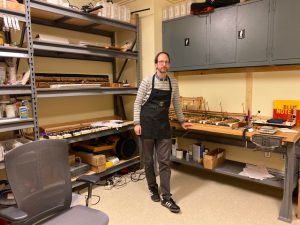 “I never got invited to the fundraising dinners,” he said, “probably because I am a CLT.”

Because the lines of their job descriptions are increasingly blurred, CLTs wind up picking up more and more slack. “There’s a lot of stuff that students don’t know I do,” said Zeno Wood.

Many also wind up working more hours than they are being paid for, and are very rarely granted overtime. Currently, CLTs are contracted for a 35-hour work week, but many go over, keeping labs open and overseeing last-minute projects around busy times.

Deborah Hertzberg is a Theater CLT of 17 years. She oversees the department’s costume shop, which makes the wardrobe for all of BC’s theater productions. She admittedly never works egregiously overtime, only going over a few hours each week.

Hertzberg is one of the CLTs who has faced one of the position’s other key obstacles, namely, an easy path to upward mobility within the CLT ranks. CLTs are divided into three levels: CLT, Senior CLTs, anc Chief CLTs. Each title comes with a slight pay increase and, supposedly, additional responsibilities. Hertzberg spent an entire decade from 2008 to 2018 before making the jump from Senior to Chief CLT, applying four separate times and being rejected for different reasons.

CLTs also increasingly feel a sense of classism and rankism when it comes to roles on the campus community.

“I think there is a classist structure that has sank its teeth into CUNY,” said Irgang. One term that circles around the CLT is that they are no more than “rat-cage cleaners,” referencing a science lab assistant’s job cleaning the cages of rodents used for experimentation.

“The rank we hold, which we are proud of, is very misunderstood,” said Copplola.

A lot of these sentiments, that CLTs are “expendable,” comes from a piece of language in their by-laws which stipulates that entry-level CLTs need no more than a high school diploma. While this may or may not have been the case years ago, most CLTs at Brooklyn College have advanced degrees in their fields. Irgang, Coppola, Margolies, Wood, and Hertzberg all have MFAs.

“It would be virtually impossible to do my job without an advanced degree,” says Hertzberg. Wood spent years at Steinway & Sons maintaining pianos before coming to CUNY, and Margolies earned his degree at Yale. They say that although they all have post-secondary degrees, their alleged lack of education is used as grounds for others to denigrate them and pay them low wages.

“CUNY sticks to it because it justifies them paying us very little,” said Margolies.

In the newest faculty contract, which was recently ratified by a wide margin in a union-wide vote, CLTs are mostly left out of the fold. 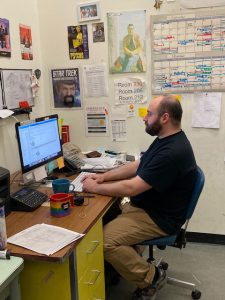 “There’s a lot of lip service and dismissal from the union,” said Wood. Many of the gaps in understanding and representation can be attributed to the fact that CLTs are not needed in departments like English and the social sciences — departments where the largest share of adjunct and faculty activism takes place. “I don’t think the contract was that great,” added Hertzberg.

Recently, CLTs have been working to raise their grievances and accomplish what they want from the union and faculty alike. Michael Irgang even made a logo for CLTs, which he’s been posting on walls throughout the West End Building and handing them out to other CLTs in an attempt to provide a more visual reference to their work around campus.

The main financial goal for CLTs is parity with HEOs, the level directly above them on the CUNY ladder.

“All we can ask for is an equal piece of the pie,” said Irgang.

CLTs also hope that they can eventually work the high school diploma language out of their by-laws, which they hope will lift their station on campuses. Until then, they’ll continue to do their work, whether or not their labor is recognized.

“I am happy to do certain things as long as it keeps the conservatory running,” said Wood.

That feeling is one that many of them share within their own departments. Despite the tribulations, they will continue to do their jobs and help in the academic experience. “I believe in BC,” said Coppola. “I believe in CUNY.”