Yvonne Williams might just be the happiest person on the Brooklyn College campus. And she’s been here four times longer than most of us hope to be: It’s been sixteen long years since Williams began her tenure as a custodian at BC.

“I love it here, and beauty of the campus,” she said, smiling outside her small closet office in the basement of Boylan.

Her custodian’s closet, which she calls her “home away from home,” has to be the most fascinating room on campus. Although it has barely enough room to fit two people, it is a pull-out bed short of being a livable apartment. Complete with an upholstered chair, a microwave, toaster oven, mini-fridge, and few potted plants, it rivals most college students’ living arrangements.

The walls are lined with newspaper clippings of her heroes: athletes, music stars, and other notable people, ranging from Bob Marley to Jamie Foxx to Rafael Nadal, a personal favorite. (“When I get home from work I lie down and watch tennis,” she said.) She has been cutting out and hanging up these photos since she started working here. She also has photos hanging up of many of the BC faculty whose offices she cleans.

She has close relationships with many of the staff who she works with and around every day. During my approximately 30-minute interview, three people strolled by to say hello to Williams. One person, who had come from the farm share in the Boylan cafeteria, gave Williams some of the produce she picked up – something she does every week. “I love it here, I love the people, I love the staff,” Williams said. 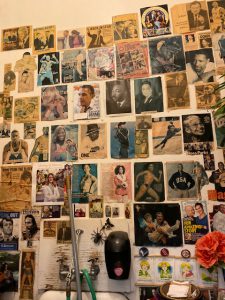 Yvonne Williams’ wall of heroes in her office. /Ryan Schwach

Her office is filled with folders of photographs of family and friends, including her brother Kester Smith, an accomplished blues percussionist who plays with legendary blues musician Taj Mahal.

Williams came to the United States from Trinidad and Tobago, starting out working as a nanny for a family in South Orange, New Jersey for 12 years. She wound up moving to an apartment in Brooklyn with several other people, where she heard about a custodian job at Brooklyn College from a friend. When that friend asked her if she wanted the job her response was:“If I can get it!”

She did get it. Sixteen years later, she is still in the exact same room she began in, and enjoying it no less than she did in 2003.

“Not any real change, it’s the same kind of work,” she said, without an ounce of dismay.

In December 2007, she was named BC’s employee of the month and printed in the campus magazine, an article she still has framed. Twelve years later, nothing has changed: she still loves her job, and everyone around her shares the same sentiment about her.

“I wish more employees would behave as she does,” said Brenda Hertzendorf, an Executive Assistant in Human Resources at Brooklyn College.

Williams’ day at BC begins rather early when she makes the short trip from her apartment near campus at 4:30 a.m. to start her shift at 6 a.m. She works cleaning half of Boylan’s first floor and the basement’s bathrooms until 2:30pm, then she gets lunch and heads home, but not before turning on the radio for her plants. “I’m not there to talk to them,” she said.

In March, she got the opportunity along with some of BC’s other facilities employees to meet Senator Bernie Sanders when he launched his 2020 presidential bid on campus last year. She has the picture they took with him mounted proudly on the wall. 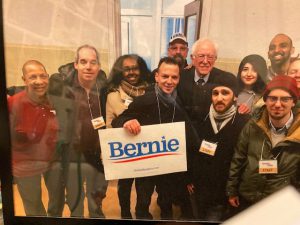 Five years ago, Williams had a scare when she was diagnosed with breast cancer, an ailment that never seemed to dampen her resolve and love for what she does.

“I would punch out, go and do the chemo, and then come back to work,” she said.

The cancer eventually was handled with surgery, and after that she was once again back to work. “The day after the surgery I was working,” Williams remembered.

After 16 years, she has begun considering retirement, much to the dismay of the staff, she says. She says the day she retires to her family and hangs up the broom might be close on the horizon.

“Enough is enough, I need to relax,” she said, laughing.