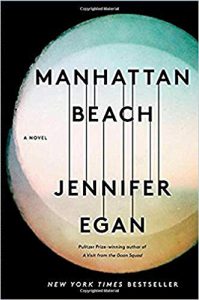 Reading over winter break was less than I had hoped. One book I read was Manhattan Beach by Jennifer Egan. You might have seen this book featured in the New York City subway book club a couple of years ago.  It was also on the New York Times’ 100 Notable Books of 2017.

But the heroine is a Brooklyn College student, and Flatbush Avenue is featured prominently.    The book knows Brooklyn well and if you’re from the area, you’ll recognize many locations.

Despite its success, I didn’t like the book all that much. For one thing, there are too many characters and deep descriptions of scenes — carefully painted in exquisite detail. You feel like you’re in 1940s Brooklyn. But at the same time the pictures are being painted, nothing is happening with the main story for pages upon pages.. The plot doesn’t move and the characters don’t develop.

Many of the plot points rely on common movie motifs. You have the “buddy” film where two guys initially hate each other but then learn to get along as they work towards a shared goal. Then you have the gangster that goes down because he tries to get clean. Towards the end you get a grand sea adventure. These took away something from the parts of the book that I did enjoy.

The start of the book, which may be its best part, is not unlike “A Tree Grows in Brooklyn.”  Anna Kerrigan, the main character, resembles Francie Nolan. Both are children of Irish immigrants in the early part of the 20th century living in a particular corner of Brooklyn, and they both lose their fathers at an early age. In addition, both live in an early 20th century ethnic (Jewish, Irish, Polish, Italian) subculture of Brooklyn.

Our next main character, Dexter Styles, is, of course, stylish, smart, and relatable. He climbs high in the underworld of the mob. He might have excelled in the outer world had he not been born into this 20th century ethic group.

As the heavy-handed cliches appear in the story, you start to doubt if these people are great characters or just copies of great characters hoping to win you over. Next stop is a movie, that’s where the real money is, right?

Why does this book work? What keeps one from reading this and not throwing it on the ground screaming “I’m an adult!”?  Is it too far to call it prosaic garbage?

It’s the story of Anna and Dexter that works. Anna, besides being a Brooklyn College student, is a diver in the Brooklyn Naval yards during World War II — the first ever. Her journey is an exciting one. Battling sexism, she perseveres by strength, fortitude, and grit.

Dexter is also facing his own conflicts. A gangster by profession, but a husband at home. He doesn’t fit in, but he survives by being clever.

When these two characters collide, the book is electric., though it’s a shame it spends too much time on characters of little importance, and not enough time on the ones that truly matter.

This may not be the greatest novel ever written, but it did satisfy my tastes. It took me out of my world and into the world of the characters, whom I came to care about. Towards the end, finishing the book became my top priority with my free time. Best of all, it gave me an insight on how people think and react in different situations.  A New York Times was an article once discussed the reading habits of top CEOs — a surprising number read fiction. Their reasoning? It helped them to navigate through unexpected situations. So much can be learned through the characters of a book.