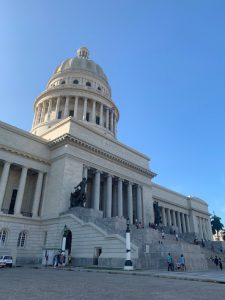 The Capitolio in Havana. / Carmen Saffioti

When I landed in Havana and was finally able to leave José Martí International Airport after making my way through customs and security, the first thing I noticed was the remarkable beauty of the city — and the stench of gasoline.

Cuba, I would find, is filled with contradictions such as this one; every question I had about Cuba was answered in two or more ways. This past winter break, I had the incredible opportunity to study abroad in Cuba. It was the first time someone in my immediate family has been to Cuba since 1955.

This realization struck me dead in the face when I arrived in Cuba. My entire life I told people I am Cuban, but in Cuba I felt like the farthest thing from a Cuban. I embarked on this trip as sort of a return, hoping to find familiarity and the origins of my culture, and while I did find some of that, I found more complexity to my idea of Cuba than I was expecting. Like many other second-generation Americans, I am disconnected from my forefathers’ ways of life and comfortably assimilated into American culture. My ideas of Cuba originated from what my grandparents and parents told me and what I saw in popular media, rather than experiencing the place for itself.

For a Latin American country in the Caribbean, Cuba has a level of notoriety that is unprecedented. Most people have some idea about the politics and systems of government there and most have an opinion. This deeply shaped my identity as a Cuban growing up, but witnessing socialism in Cuba is more complex than people imagine. While talking to Cubans, I heard a wide range of opinions on the government. Some people were anti-Castro and anti-revolution, while others proclaimed their love of Castro and hatred towards the United States.

Cuba is an extremely progressive country in some ways: universal healthcare, legal abortion upon request since 1965, and free education from preschool to university, among many other things. But Cuba is behind in some areas as well: crumbling housing that the government is slow to restore, sexual harassment towards women (that I experienced first-hand), and repression of free speech. These contradictions make it impossible to pin down Cuba to a single adjective. With that, it was also impossible for me to piece together my Cuban identity from what I experienced in Cuba–– and I am fine with that now. When my family left Cuba during Fulgencio Batista’s rule, it was a very different country. My culture is based on what they remembered of Cuba, not what Cuba is today.

The study abroad program I went on was hosted by John Jay College, and any CUNY student can register with an e-permit. Our instructor was Professor Lisandro Pérez of the Latinx studies department of John Jay.