A small crowd of students and teachers gathered on the steps of the Department of Education Building at 52 Chambers St. on Friday Jan. 31 to advocate for a decreased police presence in schools, and a fully funded CUNY.

​The speak-out, organized by the city-based groups The People’s Culture Plan and Free CUNY!, commenced at 9am. The People’s Cultural Plan leader Alicia Grullon led students and supporters as they gathered on and around the stairs holding signs reading “Cops out of CUNY,” and “Cop free school zone,” in a call and response chant.

​“We are here to make demands of the DOE,” she said, listing them as the crowd repeated:  “No cops or military in our schools,” “Disarm and abolish the NYPD,” “Abolish educational apartheid,” “Free and fully fund CUNY,” and “Make MTA work for all New Yorkers, not for Wall Street.”

​The People’s Culture Plan, an activist group of artists, cultural workers, and educators established in 2017, joined the student and teacher coalition Free CUNY! as part of a day of citywide protests against over-policing. The speak-out specifically addressed an increased police presence in schools that the speakers said victimized minorities.

​“The message is that our voices and our education don’t matter as much as our white counterparts,” said Melanie, an advocate from Teens Take Charge, a student led movement for educational equity in New York, according to their website.

​   A number of Brooklyn College students were present at the rally, including Hailey Lam, an organizer for Free CUNY! who was arrested at a previous protest in December. She, and another Brooklyn College student Sara Gafur, Free CUNY! member and Students For Justice in Palestine advocate, called out BC security officer David Mercado for racial profiling. Gafur alleged that Mercado detained her for an ID issue in the Boylan cafeteria on Halloween night. Mercado has already had a number of complaints made against him in his few years at BC, which was reported by the Brooklyn College Excelsior in 2017 and 2018. Students were not the only participants in the rally. A number of college professors came out to support the event as well, “We have a city to reclaim,” said Conor Tomás Reed, an organizer for Free CUNY! And BC adjunct professor in Africana and American Studies. Reed welcomed high school students to the CUNY system while calling for reform. 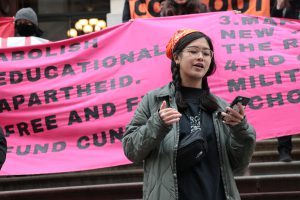 Novel, a public school student from the YA-YA Network, an organization that supports youth empowerment and young activists, spoke on NYPD officers “over survillencing,” of public schools. She claimed that it’s “evident who’s targeted,” hinting that brown and black students were the targets of metal detector searches in high schools and colleges. She continues on to say that public education has now “become inaccessible,” because CUNY recently increased its college tuition alongside adding a $120 student wellness fee.  “How can we exist in the realm of rapid gentrification?” asked Novel. Free CUNY! and the Peoples Cultural Plan put forth demands for a free and fully funded CUNY and to make MTA fees free for students.

“I’m very angry at the situation we’re in. I’m fed up with the DOE and MTA to implement cops in their system,” said Ian, a 17-year-old high school student who spoke out during the rally on his own personal experience with the NYPD in schools. Ian told the crowd of how a specific incident of assault with a police officer led him to be there that day. “I was beaten, I was pushed, I was injured, I received a bloody nose from them,” he said. Ian says that during the incident in question, the officer had no right to search him.  “So instead of hiring a faisct and racist instituion to overcriminalize our black and brown people in this city you should be spending your money on finding actual ways to improve our system,” he said.

Free CUNY! and the Peoples Cultural Plan stood together to speak on issues of policing the subways and education, free transit and an end to harassment of vendors and performers.