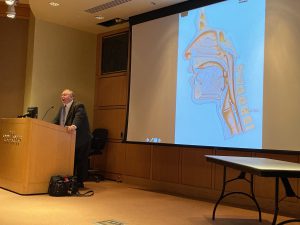 Laitman stands in front of a model of the human throat./ Ryan Schwach

Out of the estimated 8.7 million species on Earth, humans are the only one capable of articulate speech. But while it sets us apart, talking is something we humans tend to take for granted.

Our ability to talk, one that developed through evolution over the course of millions of years, is riddled with mystery and conclusion-less hypothesis. One scientist, Dr. Jeffrey Laitman, has spent the majority of his life in search of that question, studying how the human throat and mouth have evolved to allow us our ability to communicate.

“This is where I live, in the middle of your throats,” said Dr. Laitman, with a diagram of the human pharynx behind him at the beginning of the lecture he gave in the Woody Tanger Auditorium on Monday.

Dr. Laitman currently works at his lab at the Icahn School of Medicine in Manhattan as a distinguished professor and is immensely decorated in his field. Dr. Laitman is also an alumnus of Brooklyn College, having graduated from the Anthropology Department here in 1973.

“This was my home as it is your home now,” he said.

Laitman calls the ability for speech a “defining characteristic of humans,” but admits that there are still a host of unanswered questions as to how or why evolution gave us speech; questions he has strived to answer for 45 years.

One aspect of Laitman’s research revolves around comparative anatomy, comparing bodily structures from species to species. What he discovered is that the larynx, also known as the voice box, sits low in the throat of humans, but high in the throats of other mammals like cats and even whales. Whales, Laitman says, are particularly fascinating because although they live in an entirely different environment to humans, their systems are similar, just with a blow-hole. The low-sitting larynx allows more space within the throat, which gives us the ability to manipulate and better articulate sound, thus, you have speech.

Laitman’s research has worked to find the answers to how, why, and when humans developed the ability to talk. This is accomplished through the remains of our early ancestors. Of course, all we have to go with is bones, so we have to recreate things from that. One thing that Dr. Laitman and his team have discovered pertains to the structure of the base of the human skull as opposed to other mammals and human ancestors. The skull bases of our early ancestors, such as Australopithecus, who lived around three million years ago, and other non-speaking mammals have very straight skull bases when looking at it from the side. While, modern humans have incredibly bent skull bases.

This slight deviation is part of how Dr. Laitman and fellow anthropologists can tell that the larynx of our early ancestors was higher in the throat, so although they could create rudimentary grunts, they could not manipulate and articulate those sounds. Around the time of Homo erectus, the larynx was low enough we could begin to speak.

Laitman says “It is hard to pinpoint,” exactly when we gained the ability to talk.

Why we made this evolutionary change to speech is still unknown. Dr. Laitman’s hypothesis is that at a certain point in human history, we resided in the Sahara Desert in Northern Africa, and we began to do a lot of running. Bipedal running in such hot and dry environments created a need to take in more oxygen, the lowering of the larynx allows for that. So, in a way, the human evolution of speech was somewhat inadvertent, or at least secondary to other functions. “We need to breathe, eat, and poop,” said Dr. Laitman, “And then we can talk about it.”