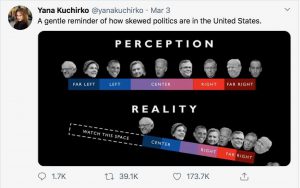 In the midst of an eventful Super Tuesday, Brooklyn College Professor Yana Kuchirko took to Twitter to express her thoughts on the current state of American politics. She didn’t expect what would happen next.

“I shared this graphic, one I had found online, because it vividly illustrated to me something important,” Kuchirko told the Vanguard.

“I certainly didn’t expect the tweet to receive as many reactions as it did.”

The graphic Kuchirko tweeted showed two scales that range from the “far left” to the “far right.” The “perception” scale shows the faces of various politicians with Bernie Sanders and Elizabeth Warren placed on the far left, Joe Biden in the middle, and President Trump and Stephen Miller on the far right. The “reality” scale right below it, however, shows the faces within closer range, indicating both Sanders and Warren to be closer to the center than what is normally perceived.

“Sanders’ and Warren’s policies are frequently described as radical left, when, in fact, they would be considered mainstream in many other countries,” Kuchirko explained.

Since Super Tuesday, Kuchirko’s tweet has been met with mixed reactions. Initially, many Europeans were quick to validate Kurchirko’s tweet.

“It’s hilarious watching Americans trip over themselves painting Sanders as an extremist and his ideas fantasy,” one Twitter user replied. “We’re living the fantasy, it’s a basic standard of living.”

“I would love America to really educate themselves on what socialism and capitalism is,” another Twitter user added.

Despite this high praise, many users were quick to criticize the tweet. Some users, however, even went as far as to attack Kuchirko personally.

“Ah yes, a communist is ‘center,’” a Twitter user replied.

“A professor at Brooklyn college [sic] posted this…I just think it’s really cool that we have people with such nuanced and level headed views of the world around them teaching people how to treat the mentally ill,” another user subtweeted.

Soon after, Kuchirko tweeted a follow-up message admitting that her main point of the graphic was “to dispel misconceptions of left-leaning democratic candidates being socialists or communists without acknowledging what left actually means.”

Furthermore, Kuchirko admitted the graphic was imperfect, claiming it “lacks nuance,” and stating “Biden portrayed so close in proximity to Mitch McConnell is obviously not true.”

Despite Kuchirko’s clarification, the criticism persisted.

“Please stick to your dumb unreplicable studies about introverts and extroverts, this kind of analysis is mind numbingly bad,” a Twitter user replied.

“If it’s obviously misleading then it fails in any goal to dispel misconceptions about American politics by actively propagating them,” another user added.

In response, Kuchirko followed up on Twitter a few days later, citing an article from the New York Times if users were interested in “more context” of what the picture was trying to say. The New York Times article is an opinion piece from June 26, 2019 titled “What Happened to America’s Political Center of Gravity?”

Among the first replies to Kuchirko’s tweet, was one user who called it “democrat propaganda” and “the last thing [he] would ever believe when it comes to where the political parties are aligned.”

“What this shows me is that many Americans don’t realize how American politics generally skew to the right when compared with most other wealthy, industrialized countries,” Kuchirko said.

“Europeans and Canadians seem to understand that point immediately and without difficulty, whereas many Americans seem personally offended by this idea.”

Since Kuchirko’s original tweet, Joe Biden went on to win 10 out of the 14 states on Super Tuesday, taking the lead over Bernie Sanders in the delegate count, and presidential hopefuls Michael Bloomberg and Elizabeth Warren both suspended their campaigns.