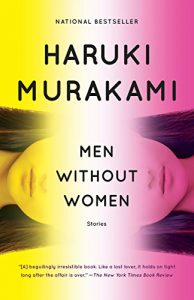 Sometimes it’s hard to finish a book mid-semester. You are already reading much less enjoyable text for classes and don’t feel like reading more. I finally finished Haruki Murakami’s “Men Without Women,” a collection of short stories.

I like short stories, but many people don’t. The argument against short stories goes something like this: There is an investment in characters and stories that just end after 35 pages. I, on the other hand, see short stories akin to conversations with strangers at the airport. You tell each other everything because you know that you will never see them again. There is something cathartic about that instant intimacy; about sharing one’s story so openly and succinctly that is both therapeutic and arresting.

A good writer can catch an aspect of the human condition in around 100 pages or less.  Anyone who has read F. Scott Fitzgerald’s “Bernice’s Bobs Her Hair” will never forget how that  ends. Likewise readers of Henry James’ “Daisy Miller” or “Jamila” by Chingiz Aytmatov, will experience pathos of doomed relationships.

Now, the book in question: “Men Without Women” is the latest book by Haruki Murakami, who is Japan’s most internationally successful author with a loyal fan base developed over many decades.

There is a concept in art known as “negative space.”  Simply put, it’s the area around the subject that isn’t the subject. It’s what is known as the “complement” in set theory. In this book, the negative space is a woman.

Each short story is about a man. Like an 1980s Woody Allen movie, there’s a lot of adultery going down.

The first story is about a man who lost his wife who cheated on him many times. One day he decides to have a drink with a man who was sleeping with his wife. They become close. The man who was sleeping with his wife doesn’t know that the widower knows his secret. So why does he do this?  Wouldn’t it be better not to know? Isn’t that more humane? “Yet he continued to return to his core principle: that in every situation, knowledge was better than ignorance. However agonizing, it was necessary to confront the facts. Only through knowing could a person become strong.”

Another story tells of a successful plastic surgeon whose romantic life consists of sleeping with married women. His demise comes in middle age when he finds himself fallen for one of the women, only to find out that he could be nothing more than a fling for her.

In another story, a young man lives in isolation.  He has a nurse who is paid to visit him. Her duties are to stock his fridge,  clean his place, and have sex with him.  His nurse is a married woman in her late 30s with children. After each tryst, they share an intimate moment. She tells him about her life of breaking into the houses of boys she liked in high school.

One of the stories is pure Murakami, but with a little Edgar Allen Poe’s “Tell Tale Heart.” Kino is a man who comes home a day early from a business trip to find his wife in bed with his work colleague. He never deals with the pain. He leaves everything to open a bar in another town. Nightmarish occurrences start happening every day, which dive into the supernatural.

This is a Japanese book and all stories are set in Japan. The noir stories of Japanese men in this book are the complement of the American manic-pixie-dream-girl cliche that I am used to.  In those stories, Audrey Hepburn or Natalie Portman will transform a distressed man into a self-actualized person by the end. The woman is merely a tool for the man to complete himself. With Murakami, the man is left hollowed from the woman.

In almost every case, the man was defined by a woman who he could not control. Each man handled their grief differently: the man who met his wife’s lover was pretty together, the man who ran away lived an endless nightmare, the man who was a serial adulator blamed women for having a separate organ which makes all women incapable of being honest with men — he was the most damned of the lot. The man who accepted the sex and intimacy of his nurse was relatively unaffected, yet keenly aware and distressed at the lack of control of his situation.  Isn’t that same for all of us right now? Who wants to be stuck inside day after day due to a global pandemic? There is a concept in psychology known as “perceived control” that says a person’s happiness can be predicted by the idea that they have control over their world.  The hard thing for anyone is the realization that we don’t have any actual control over anything except maybe ourselves, but even that can be questionable. I think “perceived control” must be pretty low right now for a lot of people, and in “Men Without Women,” Murakami has certainly created characters where that is true.