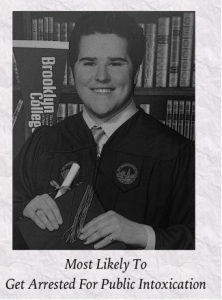 Yes, you read that title correctly. As I am graduating and will no longer be able to write for the Vanguard, Bullspit! shall also come to an end, just like smoking in restaurants.

I refuse to let my departure be a somber one. I want my college career to be celebrated in my absence and for my legacy to live on. In this piece I will recount my experience here at Brooklyn College through all four years. Let me just say I have nothing but fond memories here. I have had amazing classes, made awesome friends, and in fact, I have even met my future wife. Also, I met my current girlfriend. (Don’t worry, they don’t know each other.)

One of my fondest memories on campus was the club fair. Every semester it seemed there was a club fair, where students could see all the clubs and organizations the college had to offer. I sort of skipped from club to club. First, was the College Cannibals Club. They had a great pitch but honestly, the young man they had chopped up as samples was a little too dry and chewy, so I had to decline. The second club I checked out was the Communism Club. I actually joined them for three months, but once I got a girlfriend they demanded we all deserve some equal action from her. I had to leave. Finally, the third club I remember best was the Peace, Love And Coffee Club: Hipster Coalition. I had to decline their invitation because I actually enjoy taking showers and listening to good music.

I also frequented the food court. Most school cafeterias get a bad reputation, but this school’s cafeteria was actually alright. In four years, I was only food poisoned 12 times. That has to be a good percentage. Thinking about it, I ate there five days a week for 10 months out of the year for four years. I probably got food poisoning like… less than 10% of my time here. Those are great odds.

And lastly, the library. Although you can’t bring in food and drinks or talk loudly, the library became one of the best places to just sit back and sleep. So much so that I would see someone sleeping every time I would go. College kids love their naps. I actually fell asleep once and got yelled at and security had to escort me out. I think I was probably sleeping where someone needed to do work, but I never found the reason. Some said it was because I was sleeping in the nude under the “American History” section, but I don’t think that was why. I mean, all those books are white men’s propaganda stories and not actual truths, so I doubt anyone would have a problem with me sleeping under there. Who knows?

I had a great time here. College was a great experience. I wish I was stupid and needed four MORE years to graduate. Thinking about it, I’m graduating in exactly four years. That’s less time than doctors and lawyers and teachers. I guess that makes me smarter than all of those professions? AND I was able to sneak in a few naps? I’m probably the best thing to walk out of

About webgroup 326 Articles
Web Group is a group @ Brooklyn College