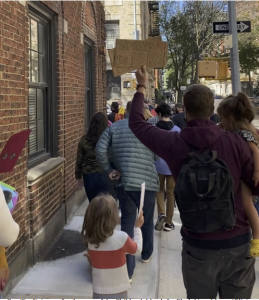 Families lining up for the start of the Children’s March for Black Lives Matter./Olivia
McCaa

Right off the Clark Street Station in Brooklyn, grassroots organization Claim Our Space gathered locals for a children’s Black Lives Matters march, voter registration, and other communal services. Tables lined along the street provided neighbors with sanitation stations, voter registration forms, a Service Learning Project explaining the misuses of 911, and a place to buy t-shirts and masks. While it may have seemed chaotic to most walking by, the two grassroots founders Maria Louissaint and Dimitri Moise were very passionate and eager to work.

“We’ve had a lovely turnout and it really does bring hope that we have so many young people and families here,” Louissaint said.

The goal of the day for their organization was simple: register people to vote, inform people on the amount of current inequality in voting, and garner support for a march for Black lives. As Louissaint said, “a fight for all Black lives is a fight for everybody.”

There is no doubt that COVID-19 has significantly impacted people’s willingness and ability to vote. While you may have never heard of Claim Our Space, the organization is fighting back against voter suppression and proving that every vote matters.

Louissaint explained that one of the biggest reasons people choose not to vote is because they believe their vote has no significance or impact. Louissaint understands this feeling but says that by not voting, “it is not the most sustainable way to approach our issues.” By voting, citizens can reposition themselves to focus on community-driven work.

Another major problem the grassroots team addressed is voter suppression amongst college students, non-English speakers, and those in remote communities, who Louissaint explains are often overlooked. College students, for instance, often dorm out-of-state and think that since they are registered to vote at home they are able to vote in their college town too. Many students are unaware that they need to change their address to cast their ballot somewhere besides their home neighborhood.

Louissaint argues that there is a purposeful “lack of sharing that knowledge.” One example of this is with each state’s ability to set its own registration date deadline, which can exclude people who were unable to register initially or those unaware of how to register.

To resolve these issues in New York, Claim Our Space has done numerous pop-ups in areas that have significantly low turnouts for voter registration. Co-founder Dimitri Moise described how in his area of Astoria, only 61 percent of eligible people are registered, which, he explained, can lead to a community being pushed out and isolated. Other neighborhoods, like District 10 in the Bronx, have the lowest voter registration and census participation. Moise explains that low turnouts, especially in regards to the census, can impact how much money goes directly back into the community. Moise emphasized that the census “only comes once every 10 years and this is the one place where everyone can be counted.”

By not participating in the census, District 10 essentially loses $2,300 per person.

One of Claim Our Space’s main goals is to fight white supremacy by combatting any misinformation that is purposefully given to Black people and minorities. Moise explains that social media plays

a big role in this problem since we have become accustomed to looking at the headlines and not fact-checking. This, in turn, further polarizes and heightens our inability to work together under a common goal. Moise believes that because of the media, the general public has become apathetic and there is a lack of space for anyone to be able to talk and listen. Claim Our Space has built “a space that is open and inclusive for people.”

“Many of the people using the resources include Black transgender and Black disabled people,” said Moise.

To achieve their mission, Claim Our Space provides a national resource list across 15 different states. Their website provides accurate resources for legal assistance, food security, bailout information, and housing. Along with these resources, Moise also hopes to soon include resources for the whole country, as well as for veterans.

Claim Our Space encourages everyone to register and participate in the election — both local and national. When you vote, you may be voting for someone who is ineligible. Moise, for example, has parents who have immigrated from Haiti and are unable to vote. When he goes to the polls he remembers that he is voting for them.

You may think that your vote doesn’t matter. However, by not voting, it increases the ability for our voices to be suppressed and should only further our willingness to push back. Moise emphasized, “how lucky we are to be able to raise our voice and determine how we want to be heard.”