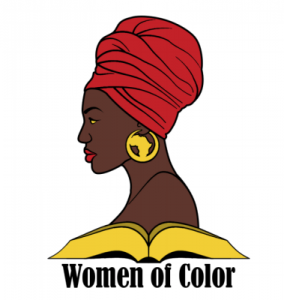 “What makes something abusive in a relationship is when one partner has power and control over another person,” said guest-speaker Jessica Martinez, who works for a local non-profit agency called the Church Avenue Merchants Block Association (CAMBA).

Martinez specializes as a health educator under the Enough is Enough initiative to help combat sex crimes on college campuses. From accompanying sexually assaulted students in filing a police report to taking them to a hospital, Martinez and her organization are there to be a support system.

“What the Enough is Enough initiative is, is that we are health educators that are on college campuses. And basically, our job is to provide workshops and services to students in the prevention of sexual assault and domestic violence on college campuses,” said Martinez. “We’re here to do these workshops, and then if anybody on campus ever goes to any of these events and they need help, we’re here to help them as well.”

The event began with a conversation about what people look for in a relationship, whether it be romantic or platonic. Attendees chimed in with answers such as honesty, communication, integrity, spontaneity, and, most importantly, memes. The consensus was that a relationship should involve genuine respect and care for one another.

As the discussion continued, the focus shifted specifically to intimate relationships and healthy boundaries between partners. Mohammad Tusar, a student from Phi Sigma Chi Fraternity, spoke about how it’s essential to give your partner personal space when they’re upset and might not want affection. The takeaway seemed to be that despite best intentions, your partner’s comfort is paramount.

Martinez reflected further on the importance of partners in a relationship having time apart.

“Some healthy boundaries are like going out with friends without your partner. Because before we met our partner, whoever we’re with, we’re our own person. We come with our group of friends, and sometimes we just want to hang out with them,” said Martinez.

Attendees expanded on what they thought could turn a relationship from healthy to toxic. One attendee, Marlaina James, spoke about how an overly-jealous partner can be smothering and controlling.

“Depending on the action behind jealousy is a big thing, but also the type of things that you’re getting jealous over. Because it could be something so small and it can start out as, ‘Oh, it’s cute. You’re jealous over something.’ And then it might snowball eventually in six months, a year, or two years, and that person is very controlling and manipulative. So, for me personally, I don’t do jealousy,” said James. To avoid it or other issues within a relationship, James thinks open communication is necessary.

There are different forms of abuse to look out for in a relationship that constitutes intimate partner violence (IPV), a form of domestic violence. Though not always as obvious as physical violence, IPV includes mental, verbal, emotional, financial, sexual, technological, and spiritual abuse. During the conference, gaslighting, which is a form of mental abuse, was specifically mentioned. Gaslighting is manipulation that makes someone question their sanity, perception of reality, or memory. For example, belittling someone’s feelings or convincing them they misremember things.

Domestic violence is an issue that affects millions of people in the United States alone. 1 in 4 women and 1 in 9 men experience domestic abuse in America, according to the National Coalition Against Domestic Violence. Though women disproportionately experience intimate partner abuse, it is a problem that affects men as well. According to the National Center for Biotechnology Information, about 15 percent of all domestic violence victims are men, and the statistic is likely higher, but men tend not to report abuse. Tusar shared his thoughts as to why men are less likely to report their abuse.

“I think it’s an ego problem because a lot of the time if you report an issue like ‘my lady hit me,’ and guys would go, ‘you’re such a big dude. How do you let that happen?’ Or that, that pain is probably nothing because they’re seeing it as a lady hitting you,” said Tusar. “And it goes to this whole social concept of seeing women as inferior or some other aspect of it. And they see it as not even abuse; it’s just something that just happened.”

Martinez also touched on victim-blaming, a mindset that has commonly made it harder for victims to escape IPV. In this state of mind, victims often blame themselves and make excuses for their abusers, ensuring that they stay in the vicious cycle of these harmful relationships. 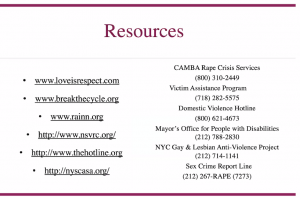 “Sometimes people will take it out on themselves and say, ‘What did I do?’ But then there could be other situations where it’s physical abuse. Sometimes people will say, ‘If I get hit once I’m done, I’m leaving. I never want to be with this person ever again,’” said Martinez. “But then there are other people who will stay in this relationship because of things they’re holding onto. You blame it on yourself at first, and then it hit again, and then you left. That also falls into what’s called a cycle of abuse where these things can happen over and over again.”

Domestic violence can be difficult to recognize and accept when you are the one involved, but as workshop attendees discussed, power and control is ultimately what makes abuse exist in a relationship. If you or someone you know is experiencing domestic violence, Martinez shared that help is available. Resources can be found on CAMBA’s Victim Assistance Program page, which provides victims with services such as counseling and financial compensation claims. CAMBA also has a domestic violence hotline that operates weekdays from 9 am to 5 pm and a rape crisis hotline available 24/7.