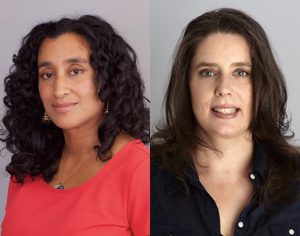 Geeta Gandbhir and Blair Foster are a filmmaking power duo whose work precedes them.

Gandbhir, an Emmy award winning editor, worked on the Emmy-nominated Whoopi Goldberg Presents Moms Mabley and the Oscar-nominated God is the Bigger Elvis for HBO.

Foster, an Emmy award winning filmmaker, worked on Oscar winning Taxi to the Dark Side and Martin Scorsese’s George Harrison: Living in the Material World.

Together, the duo co-directed A Conversation with my Black Son, a short film that explores race, police brutality, and how the parents of African American boys go about having these discussions with their sons.

On Tuesday, Oct. 6, the History Department at Brooklyn College welcomed both Gandbhir and Foster to Prof. Philip Napoli’s Oral History class on Zoom to discuss their work, offer advice to students, and share their experiences in navigating the art of documentary filmmaking.

The idea that led to A Conversation with my Black Son came after the death of Eric Garner, an unarmed black man who died from a police chokehold in 2014. As a response to the lives lost to police brutality, Gandbhir and Foster pitched the film to the New York Times, who greenlit the project, and each had their own motivation to make it happen.

“As a white woman who comes from a very conservative family, I was looking for a way to connect with them,” Foster said. “I hoped they would kind of get a window into something that I knew they didn’t really think about or know about.”

“The topic of race is so difficult and complicated for a lot of people to talk about,” Gandbhir echoed. “Trying to sort of find an interesting angle into the topic was really important to us.”

The film, which was shot in Gandbhir’s attic over the course of two days, is made up of a series of interviews with the parents of African American boys, some of whom happen to be friends of Gandbhir and were eager to lend their time to the project. This eagerness is felt early on in the film with laughs that quickly shift to tears as the parents share their experiences.

“It’s a great example of both a way to honor individual stories, and at the same time, it’s telling a universal story,” Foster said. “It works on both a micro level and a macro level.”

During both the production and post production phases, Gandbhir and Foster faced a variety of choices that went into the artistic aspect of the film. This included the decision to have the interviewees look directly into the camera.

Another significant choice the duo had to make was whether or not to interview the couples together or seperately. Ultimately, they decided to leave it up to each couples’ discretion, which they admit could have posed a significant challenge when editing.

“Usually, if you really want them to pay attention to you…and the questions you’re asking, you don’t want them together,” Gandbhir shared. “It’s much easier for editing just to have one person at a time.”

Foster agreed but admitted that it worked out in this project, saying “The couples [were] interacting, and this subject matter sort of lends itself to that.” 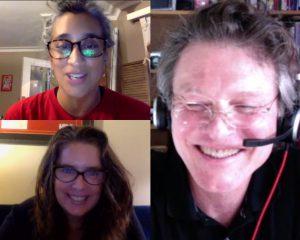 The ultimate editing challenge, however, came when they first submitted the film to the New York Times. After editing hours of footage, Gandbhir condensed it all to a final cut that was roughly 10 minutes long. The New York Times asked them to cut it in half.

“A lot of what people had to say was redundant,” Gandbhir said. “So it was about who kind of said it best…or who had a unique take.”

For Gandbhir, the most important part of the editing process was maintaining the arc that starts with the parent’s own experiences with law enforcement and then how they have these conversations with their kids, the struggles that come with that, and a section in which the parents look into the camera and speak directly to their children.

In order to both maintain the film’s arc and honor the New York Times’ request to shorten the piece, Gandbhir and Foster had to cut some parents from the film altogether.

“You have to be very ruthless,” Foster said. “There is so much stuff you like and you like the people…and you have to kind of put that aside and think what’s the story I’m telling and who’s telling it in the best way. It has to be 100 percent.”

Since the release of A Conversation with my Black Son in 2015, the film has generated a huge response with schools implementing it into their curriculum and through film festival screenings.  It was the New York Times publishing of the film, however, that allowed it to have such an impact.

“We were extraordinarily lucky that we had good timing because the Times was just starting to do these kinds of shorts too. I think they were eager for just about anything,” Foster said.

“[The film] was widely shared on social media, and I think it was their most viewed Op-Doc of that year,” Gandbhir added. “Suddenly they wanted some more.”

Because of its strong reception, the film launched into a series called The Conversation with the immediate sequel being A Conversation About Growing Up Black, a short film featuring interviews with young African American boys.

Prior to A Conversation with my Black Son, Gandbhir and Foster worked together on Mr. Dynamite: The Rise of James Brown, a documentary that utilizes archival footage and interviews to explore James Brown’s career in the music industry and his lasting impact. The duo also reflected on this experience as a means to emphasize the difficulty of interviewing people. For Foster, her interview with Maceo Parker, a saxophonist who worked with Brown, stood out.

“We were chatting beforehand, he was in a great mood…and then we sat down and the camera turned on, and he just became a robot,” Foster joked. “It’s an interview I consider one of my biggest failures. I just couldn’t get really anything good out of him, and he’s not in the film that much for that reason.”

“There’s some people who unfortunately are just super camera shy,” Gandbhir explained. “You have to try to get them to forget the camera, and that can be really hard.”

Both Gandbir and Foster have navigated these challenges by working to build trust with those they interview to ensure that they can produce their best work. This is because of the symbiotic nature of the relationship between the interviewer and interviewee.

“You’re driving and the person you are interviewing is giving you the directions,” Foster explained. “The reality is you may not get everything you want…it is a process.”

“If you are pushing them and they are not giving, then step back,” Gandbhir added. “Let them go through other stuff and then come back to it. Let them get more comfortable with it.”

As the night came to a close, Prof. Napoli thanked the duo for sharing their experiences and remarked that it was “a masterclass in interviewing and documentary production.”