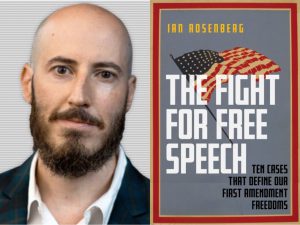 Ian Rosenberg and “The Fight For Free Speech.”/ Photo Edited by John Schilling

Before Brooklyn College Professor Ian Rosenberg became the Assistant Chief Counsel for ABC News, his career was headed in a much different direction.

“I was a theater major at the University of Wisconsin, and I took a class on free speech…and I just thought it was fascinating,” said Rosenberg. “I thought it was sort of similar to the theater work I was doing with sort of looking at a text and trying to explain it…to an audience.”

Soon after, Rosenberg was accepted into both theater and law school and ultimately opted to go to law school. It was here that Rosenberg’s passion for free speech was born, and his advisor was on board with the decision as long as Rosenberg promised that he would not become a lawyer.

Rosenberg, however, became a lawyer anyway, with the goal of pursuing a career in which he could advocate for free speech and defend the press. The culmination of Rosenberg’s work comes most recently in his new book, “The Fight For Free Speech.”

On Feb. 22, Rosenberg offered a lecture to professors and students in the Dept. of Television, Radio, and Emerging Media to discuss the book, which was largely inspired by TREM.7713X, the Media and Communication History and Regulation course that Rosenberg teaches at Brooklyn College.

“I found that there was not really the right kind of book for smart people who are interested in free speech and free press and media issues, but who aren’t lawyers and don’t want to engage understandably in sort of a legal textbook,” said Rosenberg. “Another whole set of books are…people say here is my take on the First Amendment and free speech that are really more opinion books than sort of advocacy books.”

Because none of these books seemed to suit the course, Rosenberg felt a responsibility to write the ideal book, which he refers to as “a user’s guide to understanding those free speech rights and to tell the stories of the fascinating real people who fought for their rights all the way up to the Supreme Court.”

According to Rosenberg, one of the most crucial questions regarding free speech is the role it plays in representative democracy, and this is something he addresses in the introduction of the book. One of the most important things, Rosenberg explains, is that Americans know exactly how far their First Amendment rights go.

“The point of ‘The Fight For Free Speech’ is to expand our knowledge [and] to expand people’s knowledge and to tell the story of the rights we have and the way of protecting those rights,” said Rosenberg. “I think that we are unable to keep our rights if people don’t really know the extent of them.”

One of these rights involves television content and the freedom to parody. To explain this, Rosenberg mentions former President Donald Trump’s complaints regarding how Saturday Night Live is allowed to constantly satirize him and the Supreme Court case of Hustler Magazine, Inc. v. Falwell, in which the Court protected Larry Flynt’s right to run a fake advertisement that depicted Jerry Falwell Sr. as intoxicated and incestous in his magazine.

“To parody needed to be fully protected because the Court couldn’t litigate taste,” Rosenberg explained. “If they didn’t protect people like Flynt, there wouldn’t be enough breathing space for political cartoonists and political satirists.”

Rosenberg also addressed the importance of refuting the misconceptions about First Amendment protections. One of the most common, according to Rosenberg, tends to be the idea that freedom of speech means “freedom from consequences.”

Referencing cancel culture, Rosenberg explains in the book that the ramifications of one’s speech is not a new phenomenon. Throughout history, there have been many instances in which “free speech pioneers” suffered a lot of consequences as a result of their work.

One of these figures is Daniel Ellsberg, who famously released the Pentagon Papers and exposed the true nature of the Vietnam War to Americans.

“Even though the Supreme Court upheld the right of the New York Times and the Washington Post to publish those documents…they also, a majority of the Court, believed that it would be perfectly appropriate for Ellensberg and even the publisher of the New York Times to be sued under the Espionage Act to face criminal penalties,” explained Rosenberg. “So I think if there’s one sort of misconception, it’s the idea that if you have the right to say something that you’re then somehow protected from consequences, and that is not a free speech principle.”

Aside from Rosenberg’s theater background and media law expertise, he is also an Emmy-nominated film producer for Finishing Heaven (2008), a documentary that follows Robert Feinberg’s efforts to finish a film he began over 40 years prior as an undergrad at NYU.

While Rosenberg monitors content to protect ABC News from potential lawsuits, he is also a content creator. Rosenberg has produced and directed a total of six films due to his passion for non-fiction storytelling, which was another inspiration for him when writing the book.

“I think one of the most fun parts and a part that you never cover in law school…is to tell the stories of the people,” said Rosenberg. “I feel very lucky to be able to do both.”