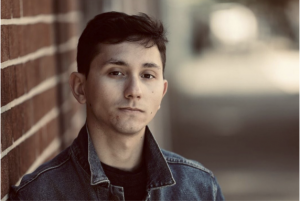 Nolan Patrick Frontera, a BC alum who is showing a play at this years festival./ @ noly_
roly_poly on Instagram

Hosted by the Borough of Manhattan Community College (BMCC),  the 2021 CUNY Theater Festival will be held virtually this year on Mar. 20. The annual festival will feature six plays and four monologues written by students across all CUNY campuses, two of which from Brooklyn College students.

Missing Spoons written by Nolan Patrick Frontera, a Brooklyn College alumnus, and Through the Doors by Shenisha Mitchell, a current student at BC will be live streamed from Theater II in the Tribeca Performing Arts Center at BMCC. The goal of the festival is to merge theater departments across all CUNY campuses for a one of a kind experience.

“Collaborate with other CUNY theatre department artists from across the CUNY population to create something truly unique,” reads a message on the festival’s website homepage.

In an email sent to all playwrights, directors, and collaborators, the festival will be taking multiple COVID-19 safety protocols to safely stage and film plays on BMCC’s campus.

“Throughout the daytime, guest artists will be giving workshops, panel discussions, and masterclasses,” representatives of the festival released in a statement. “The monologues will be live on Zoom from each actor’s location. Each of the plays will be safely staged, pre-recorded, and edited.”

Playwright Nolan Frontera is no stranger to theater, having written and showcased a play of his entitled The Encounter in Mar. 2020. Graduating from BC in Spring 2020 with a History degree, Frontera’s play, Missing Spoons, tells the story of a family struggling with drug addiction, and the effect it has on not just the abuser but the abuser’s family.

The piece, which started out as a short story, transformed into a play, and will soon be an adapted screenplay, holds a personal connection to Frontera.

“I dedicated the story to my mom and my brother, Daniel, who in 2016 passed away from a fentanyl overdose,” said Frontera. “He was only 25. I guess this play is to spread awareness. To give people my real personal experience. This story isn’t far from the truth. It’s raw.”

Having dealt with drug addiction in his inner circle, Frontera says the world of the play is a reflection on his personal life events.

According to Keith Winsted, the Artistic Director of the festival, the event will host an entire day’s worth of content for audiences, which will culminate in the viewing of the student written, directed, and performed plays. An announcement regarding guest artists will come at a later date.

“The evening is the presentation of new works by CUNY student playwrights. The plays and monologues are paired with directors, actors, and designers from other CUNY schools,” said Winsted. “A full-day lineup of guest artists offering specialty workshops, panel discussions, and lectures.”

Shenisha Mitchell did not respond to the Vanguard’s request for comment in time for printing.