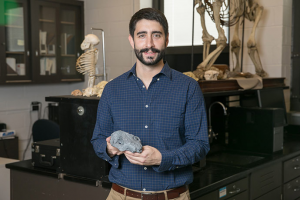 Brooklyn College Anthropology professor Stephen Chester has taken part in two major discoveries over the last year, more than many in his field achieve in a lifetime.

As part of a ten-person team of American scientists, Chester helped identify a new primate species, Purgatorius mckeeveri, which is now one of the two oldest dated primates in our fossil record. It lived around 100,000 years, after the extinction event that wiped out the dinosaurs 66 million years ago. The discovery of this early, squirrel-like, primate ancestor helps date the rise of mammals and provides evidence that they probably walked the Earth in the dinosaurs’ shadow, and survived the cataclysmic event that wiped them out.

“The most important part of this paper is documenting the oldest evidence of primates in the fossil record,” said Professor Chester. “It pulls primates back to the time of the dinosaurs.”

The path to the discovery began in the lab at the University of California, where Chester and his colleagues began analyzing a collection of fossils discovered over the last 50 years by William Clemens, a hero of Chester’s who recently passed away. After analyzing fragments of teeth, and comparing it to similar specimens in the fossil record, Chester and his colleagues realized they had stumbled on something totally new.

“We realized that several specimens possessed consistent anatomical features that were different than what had been previously documented,” Chester told the Vanguard.  “Discovering the new species, Purgatorius mckeeveri, was a really exciting moment!”

Generally, one might picture the “Eureka moment” of anthropology taking place in the dirt. “Most people believe these moments happen in the field,” Chester said. When in reality, the moment usually comes long after, when studying what has already been found.

Through only fragments of teeth, Chester and the team were able to compare with other specimens and deduce what Purgatorius mckeeveri looked like, and what they probably ate. P.mckeeveri, belonging to the genus Purgatorius, is part of an early group of primates called plesiadapiforms. According to Chester, Purgatorius mckeeveri was only about big enough to fit in the palm of your hand, and had an omnivorous diet of fruit and insects that aided as it fought to survive while the Earth was still cooling from the asteroid impact.

“You can tell a lot from teeth,” Chester said.

When it comes to surviving that extinction event, Chester credits the animal’s small size with its ability to stay alive. “A lot of 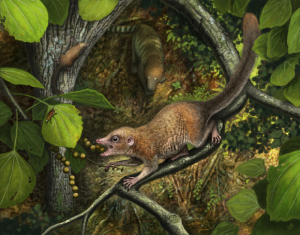 these mammals were small, and were able to hide while the Earth was in flames,” he said. “Being small was very beneficial.”

Last year, Chester helped publish another paper which also helped scientists fill in some of the blanks in our evolutionary family tree, with this discovery bridging more of the gap in human’s evolutionary history. However, there is still a lot of digging and researching to be done. Finding small fragments of these archaic creatures can sometimes be near impossible, and anthropologists like Chester have to work with what they have.

“What’d we’d really like is a complete skeleton,” he said, “We just have to try and connect the dots.”