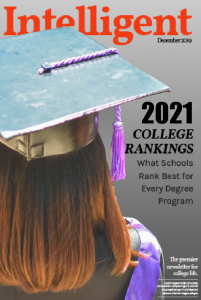 The best bang for your buck! A recent poll on U.S colleges from the research poll forum, Intelligent.com, has ranked Brooklyn college as the best affordable college in the nation.

“We are excited about receiving even more external validation of the quality, affordability, and rich value of a Brooklyn College education,” BC President Michelle J. Anderson told the Vanguard.

Intelligent.com says it compared BC with over 21,000 other educational programs based on flexibility, faculty, course strength, cost, as well as overall reputation. Coming behind BC in the rankings were two other CUNY’s, Baruch and CCNY at two and three respectively. BC also ranked just ahead of Harvard University which came out at number six, and Elizabeth State University which Intelligent ranked as the best HBCU at number five.

Some Brooklyn students weighed in on the college’s high ranking.

“I was a little surprised,” said multimedia computing major Wilson Santigo. “Like wow, really? Brooklyn college is the most affordable? That’s great.”

Santigo, a sophomore, considered this a great opportunity for those that can’t pay much for college to know that Brooklyn is affordable, and expressed that the information encouraged him.

“For the level of education, it is the best college for those that can afford it,” Santigo said.

Accommodating tuition, fees and other payments, the study shows that Brooklyn college is the most affordable in the nation by a ranking system that looks at colleges’ accredited quality standards. Intelligent’s methodology uses research on colleges’ degree programs, students’ readiness, the cost of the colleges, and student engagement, and combines the information to an “intelligent score.” Brooklyn College’s value as an affordable option for a solid college education comes as many students and former students across the United States struggle with the weight of the student debt crisis. Currently, the U.S Federal Reserve estimates Americans owe more than $1.7 trillion in student loans.

“When you think of college you think of super expensive,” JAMS student Illiana Calderon told the Vanguard,. “But to see that they are on the more affordable side is really cool.”

The top affordability ranking comes after both BC’s film and music departments were given high honors on college ranking sites.

According to Anderson, Brooklyn College is “increasingly being recognized as a unique treasure: a place where extraordinary student body diversity enriches our exceptional academic offerings, a place where outstanding students and faculty learn, research, and grow together.”