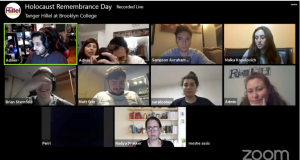 On Apr. 8, a student-organized commemorative Zoom event in honor of Holocaust Rememberance Day was assailed with fake account posting and sharing inappropriate and racist content during the meeting.

The annual Brooklyn College event usually features a Holocaust survivor sharing their story and experiences as a Jew during the Holocaust. This is generally followed by a Q & A portion, where students are able to ask the survivor questions. Finally, a prayer is made and a moment of silence is had for all those who perished. This year, Ruth Grumer was brought to speak.

“We began to notice the hacking when the chat got hacked and inappropriate messages were being broadcasted – messages that contained racial slurs,” Olya Malov, the Israel Fellow at the Tanger Hillel at Brooklyn College, said.

During the Q&A, the hackers first began sending inappropriate messages in the chat, while posing as Brooklyn College students.

“The person who was leading the discussion actually sent a message to everyone in the chat saying that he loved one of the staff members,” Chief of Staff and president-elect of USG Aharon Grama said. “He said that he wanted to have intercourse with her. At the time I took a screenshot of it and sent it to a WhatsApp chat asking if everyone was okay. He was in the middle of hosting the Q & A and he basically quickly responded, ‘it’s not me.’”

However, this was just the tip of the iceberg. As the event continued, so too did the virtual attacks.

A moment of silence to commemorate the 6 million lost in the Holocaust was interrupted by the messages.

Despite the attempts to disrupt the event, the students were able to overcome the hackers and continue with the program they had planned.

“The event went on as it was supposed to follow regardless of the disturbing hacking that took place,” Malov affirmed. “The students worked so hard, and it was incredible to see them handle the intrusion with professionalism and courage to continue and not let the hacking interrupt their hard work and such an important event of paying tribute and commemoration to the souls lost in the tragic Holocaust.”

Nevertheless, the disruptions left many attendees shocked and horrified by the acts of hate and insensitivity toward the Holocaust from the anonymous hackers.

“It was an event for the Holocaust Remembrance Day – it’s not really a political event and you don’t really expect something to happen at an event like that which is why I would say I was caught off guard,” Grama said.

“The hacking was an attack of hate specifically targeting the Jewish community and African American community at Brooklyn College,” Malov said. “Anti-Semitism has been on the rise on college campuses nation-wide and we have been working tirelessly to support our students leaders as they create partnerships and alliances to combat all forms of hate and to condemn anti-Semitism always.”

The organizers of the event expressed their gratitude for the strong partnership and unity of the Brooklyn College community, which quickly released statements condemning the acts of hate and racism.

Web Group is a group @ Brooklyn College
View all posts by webgroup →
← Newer Post
Who Are The CUNY Board Of Trustees?
Older Post →
USS Votes Down Contentious Definition of Anti-Semitism