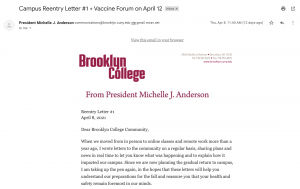 President Michelle Anderson has begun sending out “Renetry Letters” to students, about transitioning back to campus. The emails have informed the BC community about general feelings regarding reopening in Fall 2021, as well as plans for reopening, and precautions that will be taken or will likely be taken.

The first “Reentry Letter” from Anderson related the results of surveys that were sent to students and staff at the college regarding reopening. According to Anderson, the surveys revealed “that staff, students, and faculty each feel mixed about the prospect of returning to College grounds next fall.” Anderson agreed that the virus still posed a threat and provided information about a Brooklyn College forum on the vaccine on Apr. 12.

The second reentry letter provided further information about COVID forum addressed in the first letter, and also detailed how Brooklyn College was considering its reopening policies. The letter vaguely introduced the “Remote Work Policy,” which will determine which professors will work from home, in person, or a mixture of the two. Anderson also said that administration was working with faculty and staff to assess the spaces needed for science laboratories, film, and theater stages, and other specific areas where classes are needed.

“Our goal in the short term is to prioritize and prepare the key spaces that faculty have determined that they most need to teach certain classes successfully on campus next fall,” she wrote.

She added that the college will host a number of forums to discuss the issues of reopening.

The last letter, for now, detailed the administration’s plans about the indoor campus situation. Anderson announced that the college administration has installed new ventilation systems in Brooklyn College in accordance with the recommended guidelines of the CDC. The letter also addressed concerns from students and staff about the older campus buildings by announcing that the buildings had been upgraded “with newer and stronger air filters.” Anderson has noted that some buildings rely on “natural ventilation and open windows for the introduction of fresh air.”

Anderson wrote that her last reentry letter, which will be emailed late this week, will address getting vaccinated against COVID-19.