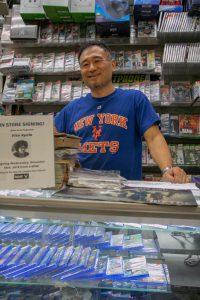 Nestled in the heart of Flatbush, Brooklyn, just across the street from Whitman Hall, Bulletproof Comics has built a legacy as a haven for all things pop culture. From comic books to video games, and everything in between, owner and former Brooklyn College student Hank Kwon takes pride in treating every customer like family. After nearly thirty years, the shop is a staple of the neighborhood. But it wasn’t always that way.

“We opened up the store in June of ‘ninety-two. And when June came, there was no business because it was graduation time. For about three, four months, we were struggling,” said Kwon. “We couldn’t even pay rent. We had no money coming in. I was very nervous, and my partner wanted to kill me.” It wasn’t until the start of the fall semester of 1992 that Brooklyn College students returned to the area, and business picked up.

Kwon’s love for comic books goes back further than his business. At a young age, a childhood friend showed him his older brother’s collection when the larger than life characters and flashy art captivated him. A comic Kwon found on a rack in a pharmacy–about a kid from Hell’s Kitchen–would be the one to turn him into a fan for life though.

“I remember this vividly, there was an issue of Daredevil, and there was this character that I later realized was Elektra. She was holding up a sai with a torn mask of Daredevil. I thought that image was so profound. I had to pick it up. It was Daredevil number one-seventy nine,” said Kwon. Elektra would often play love interest and foil to the titular character.

“I was mesmerized by this comic. I immediately went back to the pharmacy to get the back issues because it was in the middle of the story. They told me, ‘We don’t carry back issues.’ I didn’t know where to go. I asked around and they said, ‘You have to go to a comic shop,’” Kwon recalled. After stumbling upon Bob’s Bookstore on Avenue U and East 19th, Kwon’s passion for comics only grew.

Daredevil’s artist at the time was Frank Miller. Now a legend in the industry, Miller is known for his dark and gritty storylines like Batman: The Dark Knight Returns and Sin City. When Kwon caught wind that Miller was doing a signing at Forbidden Planet, a comic shop in Greenwich Village, he jumped at the chance to meet him.

“When I got in front of Frank Miller, I noticed behind him he had pages of Daredevil and Wolverine. While he was signing I asked, ‘Mr. Miller, I’m a big fan. Would I be able to buy those pages?’ I knew they were for sale,” said Kwon. “He looked up at me, looked back down and said, ‘It’s not for sale, kid.’ I was crushed.” This slight from a man he admired would become a driving force for Kwon’s career in the industry.

“I just took my comics and walked away. But in my mind it was like a wound, like a scar. So inadvertently, by saying that, Frank Miller created a desire for me to collect art. And I’ve been collecting art ever since,” Kwon said.

In the early days of Bulletproof, the surrounding area was rough. Before it became commercial and pedestrians crowded the streets, local gangs would stir up trouble for Kwon and his customers. One notorious group from the Vanderveer Estates mere blocks away, known as the “Veer Boys,” would often try to mug people as they left the store. 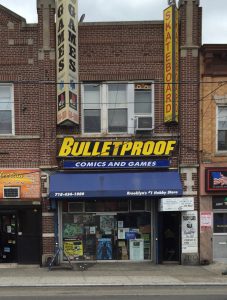 “One day when the store was kind of busy, a couple of them came in and they stood behind a young kid who was alone and went through his pockets. The kid was petrified. So I grabbed the kids and I kicked them out of the store,” said Kwon. Little did he know that this would turn into a pivotal moment for Bulletproof’s status in the neighborhood.

“An hour or two went by and they brought the whole gang back, and they all bum-rushed the store. My first thought was, ‘I gotta get the kids out of here because if we fight in the store, they’re going to wipe out everything,’” said Kwon. “I pushed them out of the store and we started fighting outside, three against seventeen.” Kwon knew that his only option was to defend Bulletproof and prove he wouldn’t let the mob intimidate him.

“That day we earned our street cred. I knew that if I lost that fight, there would be no more Bulletproof,” said Kwon. “Even if I died, I had to defend the store. That was the day we got the respect of the whole neighborhood.”

After nearly three decades of business, Bulletproof’s reputation grew to the point that it caught the eye of industry titan DC Comics. They now have a partnership with the publisher to release cover variants exclusive to the shop. In the last two years, Bulletproof expanded to include a gallery featuring artist Gabriele Dell’Otto. Kwon specifically requested DC offer Dell’Otto a contract, despite his relationship with their main competitor, Marvel Comics.

Comic book shops are a dying breed in New York City. With only a handful remaining, Bulletproof has stood the test of time. What started as a store struggling to survive, has become a respected figure in the area and the industry. Kwon’s tenacity and passion translates to the experience of everyone who walks through his doors.

“I want to thank all of our customers for coming into our humble shop for the last twenty-nine years. Time flew by,” said Kwon. “And I tell all the customers that it’s been like a twenty-nine year love affair. It’s not even like customers and a shop owner anymore. It’s like family.”