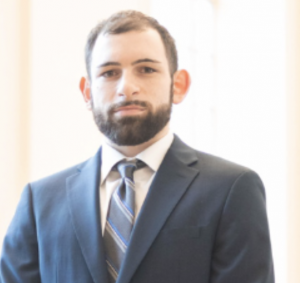 Outgoing Undergraduate Student Government President Ethan Milich has spent his entire time here at Brooklyn College serving in student government, and although he won’t be graduating just yet, he is moving on from student government.

Milich came to Brooklyn and CUNY in 2017 by way of Florida and the United States Marine Corps, where he served in Kuwait. He joined student government, then called CLAS, where he became a member of the student assembly.

“I really wanted to serve the community, and I thought this was a good avenue to get into the politics and government I was so interested in,” Milich told the Vanguard in his last interview as USG President. “I thought that student leadership and student governance was the best way to do that.”

While in the assembly, Milich helped facilitate the USG Transition Act, which merged CLAS with the other undergraduate student government called SGS, into what is now USG in order to, according to Milich, “have one strong student government that can be the voice of all undergraduate students and actually reflects and represents the voice of students.”

Prior to the merger, Milich became deputy speaker of the USG assembly and was asked by the speaker, Alyssa Taylor, to be her running mate in USG’s first ever election. Taylor and Milich won the election, but only after the original winner was disqualified by CWERC for making racist comments about another candidate, giving Taylor and Milich the seat.

“I still feel bad about it,” Milich said of the election “I still feel that it was overall way more toxic than it had to be. I think it reflected the worst in student government, and I am very glad we have moved on far from that.”

Milich served as VP of USG for only a few months before resigning his office (but kept his seat on the USS), disgusted by the toxic nature of USG stemming from the election.

“I didn’t feel as inspired to continue serving at the time,” he said.

However, when the opportunity arose for Milich to run for USG President himself, he took the chance, deciding that USG’s climate had changed and that it was time to bring what he had done at USS to Brooklyn.

“I learned about advocacy efforts at USS, and I wanted to bring that culture to USG, and I thought now was a good time to do it,” he said. “I felt motivated.”

Last spring, just a few weeks after the pandemic took us off campus, Milich was elected as the 2nd USG President. However, since he got elected last spring, Milich’s term in office has spanned the entirety of our time off campus, making him USG’s pandemic president. Although he didn’t accomplish everything he set out to do, he is proud of what he and the rest of USG did accomplish.

“I’m proud of resetting and redefining the culture of USG like I wanted to from when I began at CLAS,” he said, adding he is happy for the advocacy efforts and the few events they were able to hold. “I think that considering the conditions, we were able to accomplish a lot and fight for many student-based issues. We were still able to virtually mobilize and fight.”

The main thing Milich wished he had accomplished but failed to do was to introduce ranked-choice voting to USG, a system which is now seeing its first major foray at the city level in the coming mayoral election.

“I wish we could have modified elections,” he said, saying that the administration was hesitant to many of their ideas on how to reform the USG election process. “It’s not as democratic as it can be or should be.”

Student government has been a major part of Milich’s life over the last few years, and he says it was very difficult and challenging, but overall he is grateful for the experience.

“Student government is almost like its own major. It takes a lot of time and a lot of patience, but it is a positive experience overall,” he said. “You have to be ready to speak up and defend what you believe, but you will always come out of it a better person.”

Going forward, Milich still has a few credits to complete before graduating, but will be leaving USG. “I’ll definitely keep up with that, and look out for them,” he told the Vanguard, “It’s in good hands with Aharon and Iqura.”

Although Milich’s plans for after college still has its questions, Milich is grateful when he reflects back on his time serving the students of BC.

“I want to thank Brooklyn College students for giving me this opportunity and supporting me, being strong and pushing through this year and contributing to the effort for the BC community to move forward,” he said.