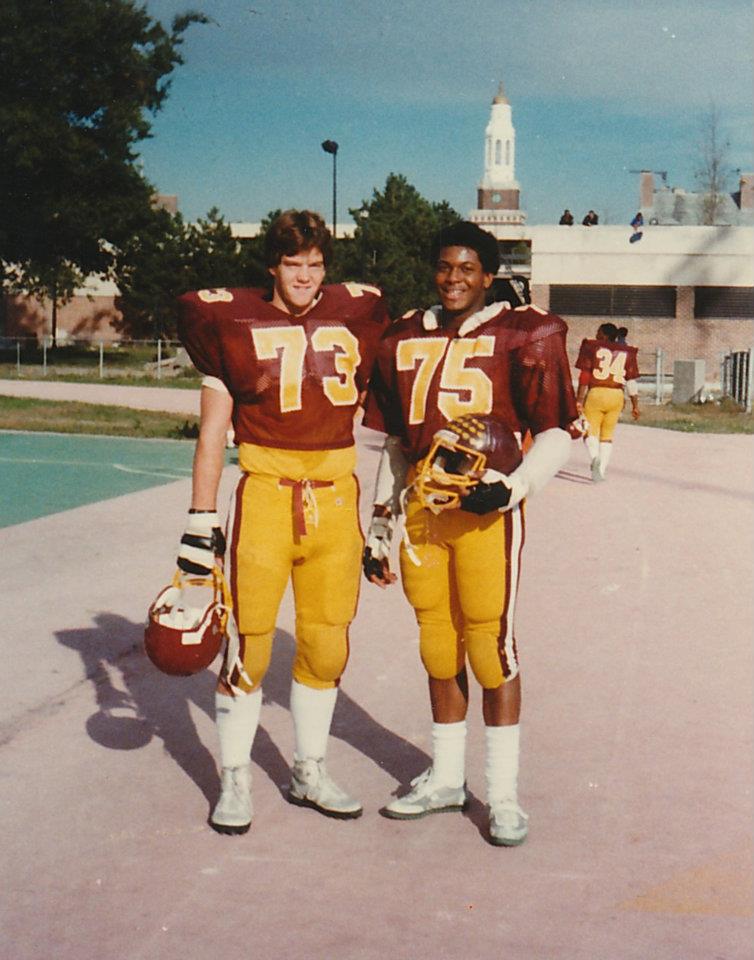 Before we were Bulldogs, we were Bridges, and before that, we were Kings. Up until 1994, every athlete who donned the maroon and gold for Brooklyn College was a Kingsman. With nearly 30 years passed, it’s hard to imagine campus without Buster jaunting around and the state of the art athletic field. But on that very spot, once sat a torn up field, which at times had to be patched with rugs. This was home to the Brooklyn College Football Team.

“From day one, it was family. I felt welcomed the moment I walked into the locker room. The program was great, the practices were intense, but when I look back, it’s a highlight of my life,” offensive lineman and tight end Rob Johnson remembers fondly. Like the “Kingsmen” name, the football team phased out in the early nineties, but the memories are still resonant for the men who played for the program.

For left tackle Fritz St. Jean, the camaraderie was valuable but surprising. “The toughest part, for me, these were guys you played against in high school, and now you have to hold hands with them,” he told The Vanguard.

As Fritz notes, the uneasiness was short-lived though. “These 50 guys, from all different high schools got together, and we made the football team. That was a beautiful thing,” he said. There were guys who went to Lafayette, Madison, Midwood, all over Brooklyn, but they were all Kingsmen at the end of the day.

Those bonds that formed from day one couldn’t be overlooked when you were in the heat of a grueling football season. In some of their tougher moments, these close ties kept the team moving forward.

“In my first year, we were 0-10,” running back Bruce Johnson said, “but we played hard. And we all came out every day for practice. Didn’t matter if it was the first week, eighth week, it didn’t matter.” That combination of grit and friendship was what the Kingsmen were all about.

“You were accepted for who you were, not how you played,” as fellow running back Pat Brown put it.

Don’t get it twisted. Even though there were some tough losses, the Kingsmen had many impressive victories. Whether they were beating bigger programs like Marist, fighting through a downpour to topple Siena, or trekking up the Canadian border to beat Niagara University in front of the New York State Governor, the Kingsmen have wins that they can hang their hats on. But perhaps none were more special than a game against New York Maritime in 1985.

“[That night] We retired number 21 in honor of our friend and captain, Bobby Naimoli, who we lost earlier that year,” Rob Johnson vividly recalled. Namoli tragically passed away earlier that year.

“New York Maritime started fast, and took a quick 24-6 lead…Despite the early deficit we refused to lose,” he said. With that drive to win in their minds, and the love for their former captain in their hearts, the team came blistering back in the second half.

“Stephan Grant returned a kickoff for a touchdown, with the help of a huge block by Fritz St. Jean. The return seemed to turn the tide for us,” Johnson added, giving props to quarterback Peter Waterman who was another huge contributor to the team’s comeback. The New York Post at the time noted, “Waterman, who completed 15 of his 30 passes, hit three touchdowns in the third quarter.”

That night, the game meant more than just football. It exemplified what the players continue to preach to this day–family. Even despite the deficit, as Johnson noted, “There was no way we were going to lose that game on that night.”

In a lot of ways, the players lifted each other up and helped each other get better. But anybody that played for Brooklyn will credit their coaches for everything they earned.

“Coach Filosa was an older brother figure for a lot of guys. He was someone you could always talk to,” wide receiver Jimmy Russell said about his former coach. Bruce Filosa, the current Director of Recreation, Intramurals, and Intercollegiate Athletics at Brooklyn College, started as head coach for the team in 1983 and saw the program through till its end.

“He tried setting up study halls and tutoring sessions for the guys. And if you ever got hurt on the field, he was the first one to come and check on you,” said Russell.

Much like Filosa, the players fondly remember Bill Chisolm and his impact on and off the field. “You could write a book about how influential this man was,” Pat Brown remarked. “He wasn’t just a football coach. He was a life mentor.”

Chisholm took over as the full-time trainer and football coach for Brooklyn College in 1970, and his impact has reverberated till today. “I think he really shaped us as men, but especially African-American men,” defensive back Craig Williams said. “I remember he pulled me to the side, and he said, ‘Craig forget about football, you got to focus on your paper.’”

Despite no longer being here on earth, Coach Chisholm lives on through the athletes he helped mold.

As college came to an end for the men who played football as Kingsmen, the lessons they learned did not fade. “Teamwork, discipline, respect for others, these are all things we learned on the field,” Jimmy Russell said.

It’s these lessons and more which convince Russell to encourage current students to give athletics a shot. “You learn life lessons when you play sports, and you make lifelong friends too. I definitely encourage people to play sports if they can,” Russell added.

With more than 30 years since some of these men laced up their cleats for Brooklyn College, they will forever remain Kingsmen. The lessons learned on the gridiron helped them to become teachers, firefighters, police officers, and overall, men who are proud of the work they put in to become better players and better people.