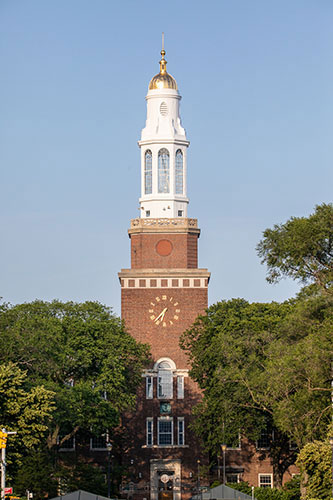 On the twentieth anniversary of the Sept. 11 attacks, Brooklyn College tolled the library building’s bell to honor those who were lost. The bell rang six times corresponding with the events of that tragic day: the attacks on the North and South Towers, The Pentagon, Flight 77 crashing in Pennsylvania, and the collapse of the Twin Towers. The tolls rang at 8:46 a.m., 9:03 a.m., 9:37 am., 9:59 a.m., 10:03 a.m., and 10:28 a.m., respectively.

“9/11 deeply affected Brooklyn College. It’s appropriate that there would be some meaningful attention given to it,” BC Professor Ronald Howell told The Vanguard. “I think that the ringing of the bell touches the heart, and that’s what the intention was.”

Since 2002, Brooklyn College has rung the bell every year on the anniversary in memorial of those lost in the attacks.

“When you look at the population of Brooklyn College you can see the groups that were deeply affected. Not just the children or relatives of first responders, but also the Muslim immigrant community,” said Howell. “This is remarked upon with pain but also a sense of hope for the future. The ringing of the bell does all of that, to me.”

Brooklyn College asked the community to observe a moment of silence with each bell toll.