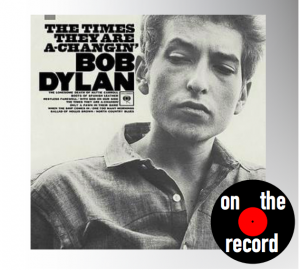 In some of life’s most poignant moments, I’ve turned to Bob Dylan. Perhaps more than any other musician, Dylan seems to stand like a mountain through everything — war, poverty, illness, anger, heartbreak, loss, love, change  always able to put down the words, even when the rest of us struggle to articulate ourselves.

In times of trouble, I like to revisit him and his brutal honesty. It’s difficult to think of another   lyricist who has, for so many years, forced people to think about what they’re listening to. Other music writers have alluded to the idea before, but the difference between passive and active bands has been a topic of discussion for decades. Yes, there’s something oddly comforting about being spoon-fed Top 40 chart radio hits — it’s easy to engage in. You can blast it in your car or on the treadmill and go about your business. But active musicians, the ones that refuse to make their music into cookie cutter shapes, write their music and lyrics so that a listener must be paying attention. They’re the ones who simply require you to not just listen to their music but think about it. What questions is it asking? How is it making you feel and why? What’s the story? Where do we go from here?

Bob Dylan, for better or worse, has always felt like America’s poetic scribe. He showed up in New York City in the early ‘60s as a gangly kid from the Midwest, but quickly learned that he belonged amongst the thinkers and artists of the West Village. From there he just… well, started writing and didn’t stop. When he was 22, he released his third album, The Times They Are a-Changin’.

And admit that the waters

Around you have grown

And accept it that soon

You’ll be drenched to the bone

If your time to you is worth savin’

And you better start swimmin’

For the times they are a-changin’”

Everyone knows this song. It’s been sung or quoted at what seems like nearly every turn of American history — turns that people believed had the potential to upend the very nature of human society. It was released in 1964, took us through the Cold and Vietnam Wars, and persisted through anti-gun violence marches from just a few years ago. The brilliance of Bob Dylan, it would appear, is his ability to write about the present with just enough of a nod to the past, combined with just enough ability to fit the needs of the future. Here we are again, the times are a-changin’ once more.

The COVID-19 pandemic has revealed cracks in our system and flaws in our ways of operation on a large scale level. Clearly, fundamental change is needed from the very roots. A chord is built from the bottom up; the bass is the most prominent, it provides a foundation, while the layers on top are softer, only adding emphasis where it’s required. Without a solid foundation, there is little to look forward to hearing. The pandemic has also uncovered who amongst us believes in certain things: science, the greater good of humanity, the importance of death. Nothing has ever felt so polarizing. America has always felt like two separate groups whose names and labels have changed over the years, but have always been drastically divided. But unlike with previous wars or elections, humans were always at the center of it. Now, as we know, we are at the mercy of nature. The virus doesn’t care who you are, where you come from, and least of all what side of the aisle you stand on.

We’ve entered a new era, but still one that Bob Dylan lives in. What he will write about this period of time will likely be an even deeper dive into the human condition that Dylan has been writing about since he was a young man bumbling through the streets of Greenwich Village. He’s already released some new music this year, including one track titled “I Contain Multitudes.”

Most of us have noticed our own multitudes during this time of isolation. We’ve started to learn what sort of people we are when we’re taken away from others and asked to be alone with our thoughts. We’ve also learned about some of our breaking points. Maybe we’re taking it easier on ourselves, maybe we’re rethinking the way we view the fragility of our lives, maybe we’re feeling like we’re hamsters on wheels, doing so much and yet going nowhere. We as individuals contain multitudes, but we as a country also contain multitudes. What we do with those multitudes can make a huge difference in what the future looks like.

Dylan concluded The Times They Are a-Changin’ with “Restless Farewell.”

“Oh ev’ry foe that ever I faced

The cause was there before we came

And ev’ry cause that ever I fought

I fought it full without regret or shame

But the dark does die

As the curtain is drawn and somebody’s eyes

Must meet the dawn

And if I see the day

I’d only have to stay

So I’ll bid farewell in the night and be gone.”

The fact of the matter is that illness is a very real part of being alive on this planet. We can either fight it without regret or shame, or let it overcome us. Luckily for us, there will be musicians, including Bob Dylan, who will do their best to take our struggle and history and put it to word and song for us to revisit later on down the line.