Gabriela (she/her) is a Television, Radio and Emerging Media major stepping into her fourth year at Brooklyn College. She was previously the paper’s Features Editor and is entering her second year as its lead editor. In 2022, Gabriela won third place for “Best News Story” by the New York Press Association and was the recipient of the Vanguard Award, a recognition given by the newspaper’s predecessors. Under the guidance of Gabriela and Vanguard’s former Managing Editor, John Schilling, the paper received a nod for “General Excellence” by the NYPA. While off-duty, Gabriela kicks back to her favorite Bad Bunny and Zoé tunes. 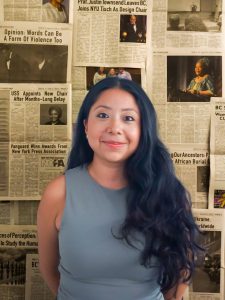 Michela (she/her) is a double major in Psychology and Theater entering her final year of undergrad. Her passion for writing stems from high school, where she wrote for the school paper under the guidance of her journalism teacher. After writing for the Vanguard since the first month of her freshman year and working as the Arts Editor for the last year, she is so excited to be taking on the role of Managing Editor. In her spare time, you can catch her nose-deep in a book or doing one of her favorite things in the world, teaching dance. 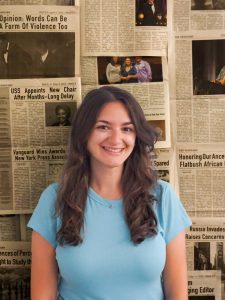 Anakin Jackson (he/him) is a Film Production major and currently the Layout Editor for the Brooklyn College Vanguard. Anakin’s originally from a small town on North Fork of Long Island and came to Brooklyn in 2019 to expand his horizons. He runs his own video production company out of Long Island, which has worked with people like Shaq and Kelsey Grammer.  He aspires to one day be a breakdancer on the subway. 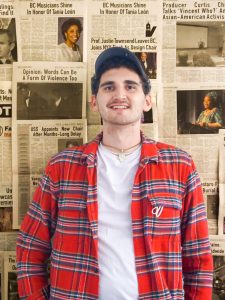 Hifza Hameed (she/her) is currently a senior studying Psychology at Brooklyn College. Outside of her academic interests, she has a deep interest in Linguistics and likes to learn different languages. She is currently trying to learn Arabic and Russian. Her interest in learning languages comes from growing up trilingual herself. She likes to travel, hike, and wants to see all of the national and state parks in the United States. So far, she has only explored parks in New York and Florida. 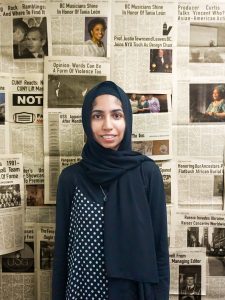 Emmad (he/him) is a Computer Science major and is currently in his third year at Brooklyn College. He is currently the Digital Editor for the Vanguard. Emmad enjoys meeting new people and going outside with friends. 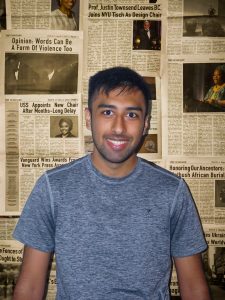 Kaylin Guzman (she/her) is a native New Yorker that loves to do touristy things. She is currently a junior double majoring in Television and Radio and Journalism and Media Studies. Kaylin is joining the Vanguard to serve as the Photo Editor. With a camera always by her side and punk rock playing in her headphones, you can find her walking city streets taking candid pictures of different scenes involving fellow New Yorkers. 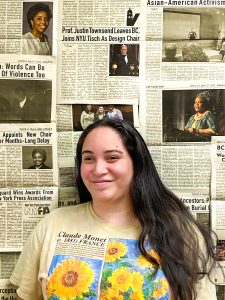 Brie Underwood (he/they) is a senior at CUNYBA at Macaulay Honors at Brooklyn College. He is majoring in Performance and Social Media Marketing. They’re excited to be working with the Vanguard as its Social Media Manager. Outside of school and the Vanguard, you’ll find them at their apartment listening to music with their cats, at a theatre performance in midtown, or working with Thee Open House Project. Their social media handle is @brieunderwood. 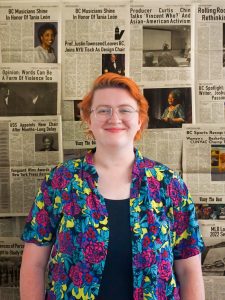 Radwan Farraj (he/him) is a History major going into his fourth year at Brooklyn College. With a passion for reading and writing since he was young, Radwan joined the Vanguard to develop his writing further for an eventual career in law and politics. He enjoys listening to EDM and is an avid metal head, and wants nothing more in this world than to touch the moon. 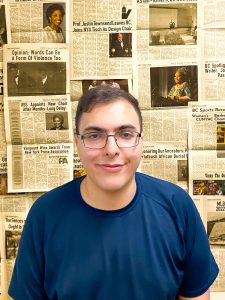 Serin Sarsour (she/her) is a junior at Brooklyn College majoring in Journalism and Media Studies. She is the latest addition to the Vanguard and is the Features Editor. Serin’s love for writing blossomed at a young age, and she aspires to be a journalist or work for a television network in the future. Born and raised in Brooklyn, NY, Serin enjoys listening to music, eating good food, and spending time with her family and friends. 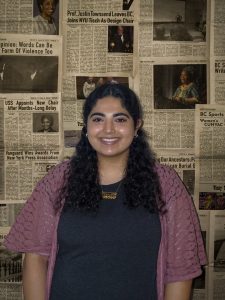 Samia Afsar (she/her) is a senior at Brooklyn College majoring in Journalism and Media Studies. Having grown up in nine different countries around the world influenced her interest in reporting stories related to various cultures and the arts. She wrote for the Vanguard Arts section for a year before becoming the Arts Editor, and is so excited for this new chapter in her life. Outside of school, she loves to go on hikes, make documentaries, promote wildlife conservation, and FaceTime her cat back home. 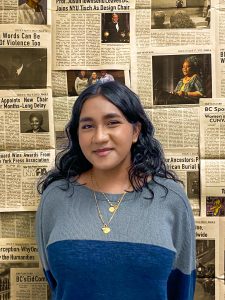 Owen Russell (he/him) is a senior at Brooklyn College and a Creative Writing and Film double major. He has loved sports since he was a little kid, but like most sports writers, he was never very good at them. In 2022, Owen earned third place for “Best Feature” in the New York Press Association’s Better Newspaper Contest. He also led the Vanguard’s sports team to earn first place for “Best Sports Coverage.” 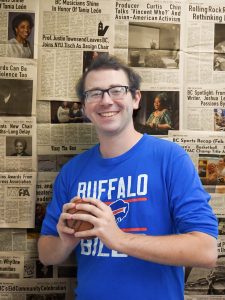