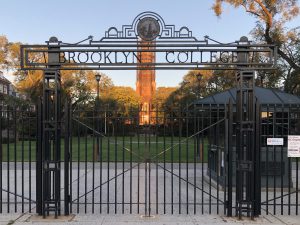 While BC’s campus remains for the most part closed, Two of the schools’ buildings are currently undergoing renovations, and construction will soon begin on several others.

Projects on Roosevelt Hall were supposed to start this past March, but were postponed when COVID-19 shut the campus down. Construction, permitted in Phase 1 of New York’s Reopening Plan, began a few months after its original date.

“Roosevelt Hall received a major facelift this summer,” Rich Pietras, BC’s Media Relations Manager, told the Vanguard. “The scope of the work included replacing the flat roofs on the old building, a cupola renovation, side chimney repairs, slate stabilization, as well as repairs to gutters and downspouts.”

According to Pietras, the project is 95% complete and should be finished by next month.

Roosevelt Hall is currently receiving exterior brick repair, brick stabilization, and waterproofing. Those renovations are scheduled to be finished by the end of November.

The library’s clock tower, or cupola, also received renovation over the summer, including exterior waterproofing, replacement of broken windows and the tower’s balcony roof with a new door. The construction also includes the installation of a new light system in the tower, repairs to the cupola’s roof, and the installation of a gold gilding for the roof. The finalization of repairs is slated for next month, weather permitting.

There are also planned perimeter cornice renovations for Roosevelt, Boylan, and Ingersoll Halls. According to Pietras, the administration hopes to start the projects next month and complete renovations on all three buildings by Spring 2021.