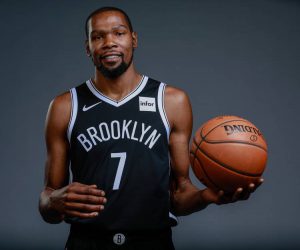 The Brooklyn Nets signed Kevin Durant despite him tearing his Achilles in 2019./ Nicole Sweet/USA Today

In the 2019 offseason, the Brooklyn Nets signed both Kevin Durant and Kyrie Irving, two of the most creative and efficient scorers in the NBA. It put them at the top of the pack to make it out of the Eastern Conference with the Giannis Antetokounmpo-led Milwaukee Bucks.

However, the Nets signed Durant knowing full well that he had just torn his Achilles in the 2019 NBA Finals, weeks before free agency. Durant sat out the entire 2019-2020 season to recover and get back to 100 percent before the upcoming 2020-2021 season. Irving picked up a shoulder injury that ended up needing surgery during the season, and he sat out the rest of the year, only playing 20 total games.

After Irving’s injury, the Nets threw in the towel on the 2019-2020 season with their two all-stars out for the season. The Nets still made the playoffs with the seventh seed, but got swept by the Toronto Raptors. As their season ended, they looked to the next season where a healthy Durant and Irving could take them to the Finals.

The first thing the Nets needed to do in the offseason was to find a head coach for the team. Kenny Atkinson was fired midseason for unclear reasons. With Irving putting up career numbers, the team was still not winning, and that seemed to be blamed on Atkinson, and it was also rumored that Durant and Irving did not like Atkinson as a coach and wanted someone they liked to take over.

The Nets promoted Jacque Vaughn to head coach, who coached the Nets’ bubble team, leading them to a 7-3 record before facing the Raptors in the playoffs. Vaughn was interviewed to become the permanent head coach, but the Nets instead chose former two-time league MVP, Steve Nash.

Nash was a player development consultant for the Golden State Warriors while Durant was on the team, and is known as one of the best point guards ever to play the game, meaning Irving could learn a lot from him. This was almost a perfect match, and with Vaughn staying on as the highest-paid assistant coach in the league, it was perfect. Nash also hired some old friends from his MVP years with the Phoenix Suns, Amar’e Stoudemire, Ime Udoka, and Mike D’Antoni to be his assistants. D’Antoni is perhaps the most important because he has been a head coach for a long time and has led the Houston Rockets as one of the best teams in the league and will be a great mentor with a lot of experience for Nash.

The next thing that the Nets need to figure out this offseason is their available cap space and then build a championship roster around Irving and Durant. The issue with this is that with the current roster from last season, they are over the cap, meaning if they want to spend more money, they will have to pay a lot of luxury taxes.

The issue is that the roster could use some sprucing up. The team is built around its offense and ability to put up points, but they have no solid outside defenders outside of Taurean Prince. On top of that, with all their scoring, and with no definity that they will be able to re-sign sharpshooter Joe Harris, the team lacks three-point shooting.

What the Nets should do first is pick up Garrett Temple’s $5 million team option because they really won’t be able to sign anyone else, and he is a decent shooter and defender. Next, the Nets should try their hardest to keep Joe Harris, as he is one of the best three-point shooters in the league, but beyond that, he is an excellent cutter and finisher at the rim. His contract has been around $8 million in the last two seasons, and he is definitely worth a lot more. The Nets will need to pay up, but it will be worth it.

Finally, the Nets should explore some trades. It would be nice to sell out and trade a bunch of draft picks and a player for a star like Jrue Holiday or Bradley Beal, and while those are not wrong moves, they could make the team way too top-heavy. The Nets have three centers, all the same thing in DeAndre Jordan, Jarrett Allen, and Nicolas Claxton.

They can’t trade Jordan because he was a big reason for bringing Durant and Irving to the Nets. So, you are left with Allen and Claxton, both solid young bigs who could bring in some decent role players. The Nets also have the 29th pick in the draft; even though it is nice to have young players for the future, the Nets need to win now, and trading that pick for another role player might be more than worth it.

Even though the Nets are one of the teams favored to come out of the East and be in the NBA finals next season, fans need to worry about what happened with the Los Angeles Clippers. The Nets are a good team, but we need to see them play well together and hope they make the necessary moves this offseason.

Web Group is a group @ Brooklyn College
View all posts by webgroup →
← Newer Post
Is Danny Dimes Worth A Nickle?
Older Post →
Op-ed: Keeping Our Heads Down