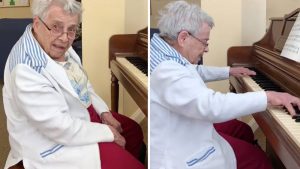 Over the last few weeks, a Brooklyn College alumna made headlines when a viral Tik Tok video took the internet by storm.

For Randi, who recorded the video in 2019, the response has been overwhelming.

“I did not anticipate that it would go viral but here we are,” Randi Lebar told ABC 7 News. “My mom, a professional musician, has significant dementia, but life makes sense to her at the piano.”

According to Hal Leonard LLC, Elaine Lebar is a former composer and music teacher with music degrees from Brooklyn College, the University of Missouri, and the Conservatory of Musical Art in Manhattan. Elaine composed music until about ten years ago when she started showing early signs of dementia.

In 2017, Elaine moved to a memory care facility in Buzzards Bay, Massachusetts. This is where Elaine currently resides and where her viral performance was recorded.

The video, which currently has close to 7 million views, shows Elaine seated at the piano. Randi, who can be heard off-camera, encourages her mother to begin playing.

“I don’t know it,” Elaine responds before quickly playing the piece’s opening chords without hesitation or struggles of any kind. The music has remained within her memory despite suffering from short-term memory loss due to dementia.

“Although she can dress and feed herself, she has almost no short-term memory,” Randi said to Metro. “Five minutes after playing piano, she will not remember that she played.”

It is for this reason, however, that Randi decided to share the video in the first place. Under the username @orifbone on TikTok, Randi posts regular videos of her mother playing piano not only to share her talents but to “raise awareness of dementia.”

This activism, however, has taken on a whole new meaning with the COVID-19 pandemic. Randi says she uploaded the year-old video to also show “the effect of the pandemic restrictions on this population and their families,” as reported by ABC 7 News.

Since the pandemic began in March 2020, Randi Lebar’s visits to her mother have been limited, but she tries to put out more videos of her mother playing whenever possible. This has evolved into a series of videos, which are each captioned with “Music in Dementia.”

According to Classic FM, Randi’s first in-person visit to her mother was on September 18, 2020. Elaine sat at the piano to play Claude Debussy’s “Clair de lune,” but something had changed.

“As she struggled through ‘Clair de lune’…I realized how much she (and I) had lost in the preceding six months,” Randi told Classic FM. 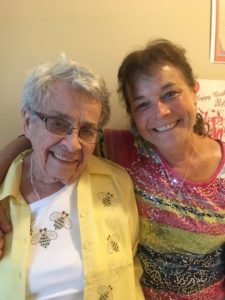 A video of this performance can also be found on Randi’s TikTok @orifbone, and Elaine’s struggles, if any, are hard to spot as the music flows from her fingers just as it did the year prior. The music is still with her, and this is hardly shocking.

Over the years, some studies have indicated that music can be therapeutic to those who suffer from Alzheimer’s disease or dementia, and in some cases, helps generate memories within them.

“Music can be a lifeline for people with dementia. It facilitates shared, quality musical moments with friends, family, carers,” Grace Meadows, the programme director of Music for Dementia, told Classic FM. “Music for people living with dementia isn’t a nicety, it’s a necessity.”

As the video continues to spread throughout the internet, Randi Lebar has tried to explain TikTok to her mother, and it is here where Elaine’s humorous side has shone through.

According to Randi, upon hearing about her viral success, Elaine was quick to say: “They must have too much time on their hands. They need something better to do.”

Besides the laughs, however, Elaine called the experience “wonderful” in a recent TikTok video and encouraged those who watched her viral performance to “sit at the piano themselves” and try to do their own thing.