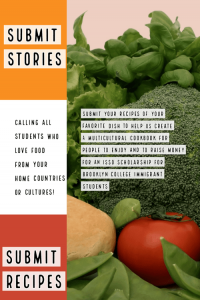 ISSO at BC is calling on all BC members to submit their recipes./ @issobc on Instagram

More often than not, different cultures share one similarity that has made its way through people’s stomachs and into their hearts: good, decadent food. From curried shrimp to fried rice, these crowd-pleasing dishes can be a taste of home for those who grew up eating them. To Brooklyn College’s Immigrant Student Success Office (ISSO), all food anecdotes are worthy of commemorating and embracing collectively.

“We’re not here to do the stereotypical dishes. We’re here to really celebrate the stories,” said Ana Bartolome, the Program Coordinator at ISSO.

In collaboration with the Black and Latino Male Initiative (BLMI), ISSO will compile several recipes and narratives from the BC community for their upcoming “Multicultural Cookbook: An Immigrant Story.” Proceeds from book sales will fund ISSO’s future scholarship for BC immigrant students who are ineligible for financial aid.

On Tuesdays, ISSO hosts sessions where participants can retell memories of their favorite meals with one another. In the most recent get-together, Bartolome delved into her recollection of paella, a Spanish dish made up of rice, vegetables, and one’s choice of seafood, sausage, or other meats. As an immigrant coming to the States and leaving behind her life in Spain, Bartolome’s transition was best accompanied by one specific recipe.

“The reason why paella is special to me is because it’s my mom’s recipe. It is my mom,” said Bartolome.

ISSO brought along these weekly food talks to their celebration of International Students’ Day on Nov. 17. “This is a way of getting people together and not apart. Now with COVID, so many people are disjointed, and not together,” said Deborah Alves, BLMI’s Commons Specialist, when referring to the cookbook she proposed last spring. Alves first came up with the idea through her meetings in “Breaking Bread, Building Bonds,” an initiative that gathers different communities to chat and learn from one another. There, she realized that a variety of cultures are interconnected through cuisine.

“We’re really here to really show the love when we eat these dishes,” she said.

At the event, Alves took participants back to her childhood on Trinidad and Tobago’s beaches, where her father helped local fishermen with their nets. In return, he received a bucket of shrimp and sometimes, a small shark.

“Every time I eat curried shrimp, I am taken back to those childhood memories of crashing waves, the smell of the sea, the flock of birds, and the singing of mosquitos in my ears,” she said during the event. Alves’s relationship with Trinidadian-style curried shrimp became part of her now-deceased father’s legacy.

For Leonardo De La Rosa, President of the Dominican Student Movement (MEDO), the flavors of his go-to Mangú Con Los Tres Golpes and La Bandera Dominicana, can not be topped outside of his grandmother’s kitchen.

“I would say the best place to get it, and I’m sure a lot of Dominicans would say, is probably from somebody’s grandmother,” said De La Rosa. “I’ll say my grandmother, both my grandmothers.” With their array of mashed plantains, fried cheese, rice, salami, and other ingredients, these dishes hit differently when made in the Dominican Republic, he explained.

Besides exchanging their nostalgia of food, participants delved into some prose, music history, and the Caribbean’s grand carnivals. Shadae A. Brown, a BC student from Jamaica, recited her poetry that encompassed her three identities – Jamaican, Black, and woman of color.

“When I was in Jamaica, I was only known as Jamaican. But when I came here for school as an international student, I’m first seen as like a Black person, and then a woman of color, and then Jamaican,” said Brown. Her first poem was a testament to her unequivocal Jamaican pride.

“They say that Jamaicans are overconfident patrons,And duh – obviously we are/Why would we diminish our shine when all over the world we shine like stars?,” she recited.

As the spring semester draws near, ISSO plans to organize their cookbook as much as possible with the help of their key collaborators, including retired BC Journalism Professor Jessica Siegel, who will arrange the book’s layout. Currently, the office accepts recipes and writing supplements from all BC students, faculty, and CUNY members willing to share.

“Initially we wanted to connect it to the immigrant journey, but really it’s how that meal attaches to your heart. How that meal keeps you going, and what it means,” said Jesús Pérez, Director of ISSO.

As ISSO looks for publishers willing to donate their services, they remain optimistic of all the opportunities their project will bring BC – especially in bringing closer together the college community through storytelling.