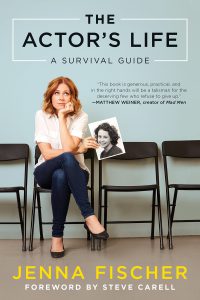 Any real fan of The Office knows to watch only up until season seven when Michael Scott leaves, because it’s only downhill from there. After watching the series from start to finish, how could I not pick up one of the cast members’ newest books? It was no surprise to me when actress and producer Jenna Fischer’s The Actor’s Life: A Survival Guide turned out to be a delightful self-help book for aspiring actors in the entertainment industry.

Fischer, who is most known for her role as Pam Beesley in the hit mockumentary, tells her personal tales of how she made it to fame (or almost didn’t) in the television and cinematic universe. The book reads more like a memoir or a really long journal entry and allows Fischer to give helpful yet critical advice to those in college seeking a life on stage after their four year education, or to any actor starting out in the business.

If you are looking for ways to get started with or without any background training, it is offered to you through a series of step-by-step chapters. This includes headshots, getting into a union, building a resume, finding and keeping a manager or agent, how to audition, and most importantly, how to deal with rejection.

As I aspire to be an actress myself, I heard about this book from publicity on Jenna Fischer’s Instagram page, and had it in my Amazon wishlist for months before finally getting my hands on it. Once reading it, I decided to take a new approach to acting and allow myself to absorb the words written by Fischer. The points she made were smart and concise, and I believe she offered interesting advice to put a nervous beginner at ease.

Fischer uses her personal stories to connect with her readers, as well as her inside view of the industry, and gives advice on how to cope with the downsides of life in general. She proves that even celebrities are human, and that they go through the same emotions everyone else does.

Aside from her advice, her main argument throughout the book is to continue with your dream and career, even if it knocks you down countless times.

The chapter “Auditioning, Rejection, and How to Persevere” is where she argues this the most. It is probably the best writing and advice I have read about how to deal with the word “no.” The quote “we’re actors — we’re the opposite of people” doesn’t hold true in Fischer’s eyes. Her advice on what to do if someone in the industry rejects you made me feel better about all the rejections I have ever received. She says to take a personal day to eat a lot and have fun; to celebrate instead of sulk, and keep trying.

Reading this, I thought back on all the times I had ever been turned down. Looking back, it doesn’t seem like the end of the world anymore.

Every five to seven pages, Fischer includes a small inspirational quote, from everyone from Carol Burnett to Confucius. One of my favorites listed in the book is a quote by Seneca that reads, “luck is what happens when preparation meets opportunity.” Inspirational quotes may be cheesy, but in this memoir, each quote is carefully picked for this book. The quotes generally relate to the situation being discussed in each point of the book. If you pick the book up solely to read the quotes, you will finish them and most likely have a changed outlook on life and all of its aspects. But you need to finish the book in order to understand the life lessons Fischer provides.

Many acting self-help books exist out there, including my all time favorite, Talking As Fast As I Can by Lauren Graham. But the two memoirs have very different styles of writing, humor and advice. While Fischer says be careful, Graham says just go for it and don’t look back. Both are very entertaining reads, but Fischer tends to stay on the more overly cautious side with her advice.

Which leads me to what I believe is the only flaw of this. Her advice, though very wise and easy to follow, is too cautious at times. At many points in the book, she advises the reader to a specific task in the entertainment industry, followed by words of caution. This includes phrases such as “ask first,” and “don’t overestimate.” In the acting world, you can never be too polite, but as an advocate for yourself, I believe there is most definitely room for some pushiness to get what you want.

Pro tip: watch most, if not all of her movies and TV shows before reading. Watching Fischer’s films after reading the book pulled the veil from the magic which cinema can create because she gave specific details into how her scenes were constructed. Watching the clips after reading made it hard to believe in the magic of cinema, as the reality behind scene construction was clearer due to the book.

These minor flaws can be overlooked by some readers who are passionate about their craft. I however, could not overlook them. Other than this, Fischer offers a comforting argument for any actor struggling at the moment who needs a little pick-me-up. Fischer says, “the journey to becoming a working actor […] is a long and difficult one that requires a lot of hard work and perseverance. But it also requires something more obscure and out of your control: luck,” as she speaks of getting back on the horse once you’re thrown off of it. It’s the main reason you should listen to her argument, and mine as I support her thoughts.

I would recommend this book not only to actors, but to anyone who has a dream they would like to carry out or even someone who is curious to know what the life of a working actor entails. So especially for all you Theatre majors, minors and aspiring actors, pick The Actor’s Life up and give it a good thorough read. As Fischer says, “the world needs you.”