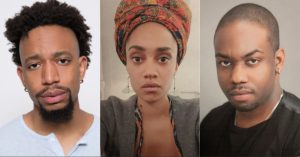 The overheated labyrinth of a building that is Roosevelt Hall played host to a production of Dominique Morisseau’s Sunset Baby this past week for a quick three performance run.

Directed by Khrystal Agard, Sunset Baby focuses on the story of a drug dealer named Nina (Amanda Enzo), who lives in a New York City slum and is the daughter of distinguished black revolutionaries. In the aftermath of her mother’s death, Nina’s estranged father, Kenyatta Shakur (Henry Ponthieu), attempts to reconnect with her, but he returns with a specific request. It is revealed that Nina’s mother wrote a bunch of letters to Kenyatta, but never sent them. Knowing Nina has them, Kenyatta desperately wants to read them, but Nina is resistant. Not only does she resent her father for his absence, but the letters are both the last remaining link to her mother as well as a link to a significant sum of money. Kenyatta’s return sheds light on the often fraught relationship between the political and the personal and the complexities which surround Black activism. All of this makes Nina question if she can forgive her father and forces her to reevaluate what she wants most in life.

Let’s be real. Sunset Baby is raw, explicit, and uncomfortable in the best possible way. For this production, the play was performed in 316RE, a dance studio/gymnasium turned black box theater, creating an intimate experience between the actors and the audience. Emotions run high in this play, and the tight space created amplifies this effect.

Similarly, the play’s events all take place in the same set: Nina’s New York City apartment, where the audience watches the events unfold. Early on, it becomes evident that the audience is witnessing events happen in a fly on the wall-like scenario, a refreshing departure from elaborate sets that are constantly changing and often overlooked.

By framing the play in this way, the actors are able to thrive with the material and space that they are given. Emotions run high in this play, and this is especially true for Amanda Enzo as Nina. From her first line to her last, Enzo wasted no time tugging at the audience’s heart strings and saying every line with power and purpose. Despite Nina’s questionable actions, Enzo’s portrayal allowed the audience to feel and empathize with her pain. Enzo succeeds especially in balancing Nina as strong and assertive yet vulnerable and conflicted with trust issues. Her occasional outbursts of crying and screaming adds a praiseworthy viscerality to Enzo’s portrayal.

Enzo is supported by Ponthieu as Kenyatta, as well as Jon Mays as Damon, Nina’s ride-or-die boyfriend. In the beginning, it seemed as if Ponthieu was holding back as he went through the motions, but as the play progressed, it became evident that this was intentional and rightfully so. Compared to Nina’s emotive air, Kenyatta comes off as reserved, but it becomes apparent that he too is suffering. There is a notable scene between Nina and Kenyatta in which her words push him so far that the true, infuriated Kenyatta comes out.

The same is true for Jon Mays as Damon, who comes off as cool and collected, with visions of a better life. Similar to Kenyatta, however, the real Damon emerges when Nina pushes his buttons, and his own pain becomes apparent too. This pain is something all three characters share.

The entire play shows each character putting up a front, masking their true emotions and presenting a false identity. Each character builds a wall around their emotions, while the others try to topple it. It is in these scenes that the audience finds out who these characters really are: characters playing characters.

This idea becomes especially evident in the scenes without any monologues or dialogues. There is one scene in which Nina removes her make-up and changes from her scantily-clad outfit. As she does this, her true self is exposed layer by layer, and she begins to break down crying. There are a few of these “silent” scenes (although they are accompanied by music), and they are arguably just as powerful and effective as the scenes with dialogue.

Despite these positives, Sunset Baby is far from perfect. The play’s pacing is a huge struggle, as there are numerous scenes that either carry on for way too long or feel rushed. The pacing is almost soap opera-like with character moods shifting from one extreme to the next in a matter of minutes. In addition, there is a constant shift between scenes with dialogue and soliloquies from Kenyatta which get exhaustingly predictable to the point where the words fall numb and all power is lost.

The real problem with Sunset Baby however, is that the story does not smoothly take the audience from point A to point B. The witch’s hat plot diagram that you learn about in middle school does not exist in this play. The story just feels like one big climax, which goes nowhere and fails to offer any real resolution in the end. Much like some unresolved aspects of the plot, the play’s title offers no real significance and is merely a brief, insignificant reference in a scene towards the end of the play. The play could have simply been called “Nina.”

Overall, these imperfections are the result of the script, itself, and not the fault of this particular production. The powerful performances by the three actors and the uniqueness of the production’s structure alone made seeing Sunset Baby worth it. Sunset Baby, which first premiered off-Broadway in 2013, is a refreshing shift from your stereotypical Cinderella story and adds more diversity to the theater, an industry that is often criticized for its lack of representation.