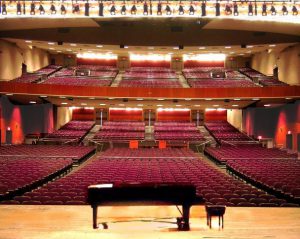 Pre-pandemic, many theater classes required students to see every mainstage production on BC’s campus, and write a report on each production; for a total of three to four papers a semester per class. These papers are a large chunk of the overall class grade, and gave students the opportunity to critique anything from the acting, or stage elements such as lighting, design, or costumes.

Since shows on campus were postponed, professors had to find an alternative to this assignment. Solution: Watch full length plays online.

While it’s nice that you can sit and watch these shows from the comfort of your own couch, or rewind if you didn’t quite catch the joke made the first time, these shows are almost always bad video or audio quality, and a lot of these performances come from archived videos of some no-name volunteer theater company. It is not the same quality as watching a show on campus that students worked hard for.

As someone who has been experiencing this alternative assignment for the past two months, I can say I want the BC shows back. Give me a paper on those shows any day. Between the friends and grad students/adjuncts who work on the shows, it is so much nicer to sit and watch your peers on stage for two hours rather than a screen of unknown actors.

One of my favorite show memories comes from the first (and unfortunately, only) production BC staged this semester, A Winter’s Tale. I worked as the sound board operator, and not only was I able to see a great performance every night from my seat in the booth, I gained so much knowledge and friendship from the cast and crew.

What made that show so exciting were the projections, sound and lighting effects that kept the audience on their toes constantly, anticipating heightened events, not sure where to look. The ability for them to look all around the stage at once and take in what they choose to absorb is not something you get from one singular camera angle telling you where to look in a performance.

As I sit to watch productions that are not very good, it makes me wonder just how many students are hitting play on their laptops with full intention to watch, and then realizing 20 minutes in that it will take a lot of will power to be watched fully through. But what might seem like over two hours of my life wasted was actually yet another fun memory I can add when I look back on my quarantine times. Plus, it was very comforting to hear that the rest of my class, and even my professor to a certain extent, did not enjoy the performance either. In a way, it brought us all together.

But people like me sit through the entire show, no matter how awful. If it’s bad, I don’t mind, I’ll just make fun of it the entire time. Bad entertainment is still entertainment, right?

Take this one performance I was assigned to watch for a production class. It was a local London theater company that put on the play The Importance of Being Earnest. Instead of a traditional set from the late 19th century, this company decided to cover their walls, floor and ceiling with mirrors. This made it incredibly hard to see what was happening on stage, as the back wall of the stage reflected the audience.

Comical moments in the piece helped me deal with the other helpless aspects of the show. Though the play’s whimsical slapstick action was fun to watch, I could not focus clearly when I was too busy being drawn to the adolescent boy in aisle five picking his nose for the entirety of Act 2. On top of that, the video quality was poor, and the audio was so bad, that even the subtitles weren’t correctly shown across the screen.

This experience showed me just how much I took college shows for granted, or didn’t look upon them in a positive way, especially the productions that BC puts up. With four mainstage shows a semester, plus individual and freelance projects, more respect should be given to the theatre department and the production process our school has to offer. Though it could have seemed as though I attended these shows to fulfill an assignment, I always loved going to support my friends, department, and the BC theater community. Show after show on campus always has something to offer because the level of talent shown at BC is always top notch.

To all the on-campus productions, of any kind: we miss you.

Web Group is a group @ Brooklyn College
View all posts by webgroup →
← Newer Post
On the Record: The Times They Are A-Changin’
Older Post →
BC Alum Patrick Newall Gives Advice on Film Trade