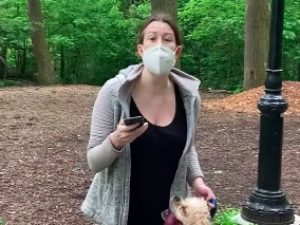 Amy Cooper, who faces charges for unnecessarily calling the police on an African American man in Central Park./
Christian Cooper

Calling racists “Karen” isn’t helping. There is no shortage of “Karens” out there. There are racist women and men who will try to crush the souls of anyone they think is not racially acceptable. It’s a feckless power grab. Some of these incidents will be caught on social media. The juicier ones will make it on TMZ or even the New York Times. It is the lowest form of existence.

The power of the cell phone camera in this day and age is that we can document these verbal attacks and bring them to light. No longer is there plausible deniability. The frequency should establish a pattern that can be burnt into the collective viewing experience.

And that’s where things fall apart.

This could be a powerful step forward in our country’s evolution. Instead, we have chosen to make a container, a “catch all” term for such incidents. We focus on the incidents where the perpetrator is a woman, which is sexist, and we can call that woman “Karen.”

This isn’t the first time a generic woman’s name like “Karen” or “Becky” has served to represent a person who is motivated by racism. The trope goes as far back as the days of Reconstruction after the Civil War and continues to be used today, like in Beyonce’s “Lemonade,” released in 2016. These names and words used in the racial lexicon are both a shorthand and a psychological protection against existential death that racist language attempts to inflict. However, this doesn’t get us anywhere.

Everyone can shame “Karen” instead of dealing with the issue of racism. This protects the identity of the culprit. It helps her escape consequences for her actions. The term “Karen” is a protective class abstraction to shield racism from scrutiny. It’s a straw man fallacy.

This is why Christian Cooper has chosen not to assist in the DA investigation against Amy Cooper. Ms.Cooper, a white woman, called the police from Central Park in May. On the call, she falsely accused Mr. Cooper, a black man, of attacking her. Mr. Cooper wrote a powerful op-ed in the Washington Post this month, discussing his decision not to aid the investigation, stating: “Focusing on charging Amy Cooper lets white people off the hook from all that. They can scream for her head while leaving their own prejudices unexamined. They can push for her prosecution and pat themselves on the back for having done something about racism, when they’ve actually done nothing…”

This is not the point of activism. As Barack Obama put it, “I do get the sense sometimes now among certain young people… that the way of me making a change is to be as judgmental as possible about other people and that’s enough. That is not activism, that is not bringing change. If all you’re doing is casting stones, you are probably not going to get that far…” We want to take this mess and make the country a better place. If we start by making the United States a better place, then the world may follow suit.

When Barack Obama was elected, many people believed that America was in a post race society. That was dead wrong. Donald Trump’s rhetorical power comes from that liberal idea that racism isn’t a problem that still exists or at least one that they want to acknowledge.

Trump campaigned on racism. He came off as an iconoclast. He was the only candidate speaking honestly about race. It was pure hate, but he was being genuine. It worked because the other side pretends that racism doesn’t exist. It pretends that the country is black and white. It isn’t. It pretends that only white people are racists. Immigrants and minorities are also racist, not to whites, but to each other. Often, they rally around racism to other minorities. That needs to be examined. However, our structure of Black , white, Latinx, and Asian doesn’t allow this.

Take for example junior congressmen Richie Torres from the Bronx , a self-described Afro-Latino, who is not allowed to be both in the Black and Hispanic caucus in the House of Representatives. I can think of ten New York Yankees who are both Black and Hispanic, but this does not fit in the structure of race in our country. This is important because it is one of many examples how the conception of race is absurd.

So, how does this relate back to “Karen?” The Karen concept protects the racial structure, i.e. the status quo, as long as the problem is some made-up person then nothing is wrong.  In essence, all of us, as a nation, need to look closely at ourselves and what our values are. The “Karens” of the world are just a symptom of the problem, not the problem itself.