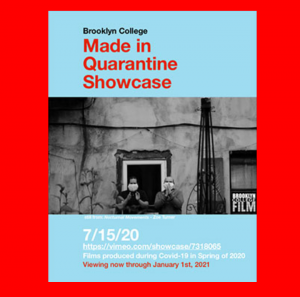 Poster for “Made in Quarantine Showcase”./ Brooklyn College website

Although most of us probably won’t be waving quarantine life away with tear-studded eyes and heavy hearts, a number of students in the Undergraduate Film Program wouldn’t let those endless days be forgotten in our rush to get out of them. Whether it’s a writer, singer, or filmmaker- an artist never lets a good story go to waste.

In a collection of short films dubbed the Made In Quarantine Showcase, undergraduate students from the schools Film Department documented life during the COVID- 19 quarantine.

The 23 films, ranging from a minute to up to an hour, are an ode to the creative capabilities of the filmmakers who were relegated to finding a story within the square feet of their home. But as the saying goes, necessity is the mother of invention and creativity is it’s driving force.

The stories, while each unique in its perspectives, fall roughly into three distinct categories of overall feel and narrative. Click on the first film in the showcase, and a video dubbed “Closing In” will start playing on your screen. Deceivingly innocent at first, only a couple moments in you’ll find yourself squashed alongside Derek in a shrinking room- a clear parable for the suffocating, anxiety-ridden life of one living through a pandemic.

Thus, the first archetype. Although some have more overtly negative underpinnings, this group is characterized by the lockdowns drawn-out days of bleakness. In Solita, a minute long film by Valeria Lima, our protagonist glosses her lips and darkens her eyelashes with mascara for a date with her laptop and desk. She ticks off the days on her calendar monotonously and throws dirty clothes to an already full laundry basket. A need to find entertainment in things that would otherwise bore us seeps out of Johnny Chen’s two minute film dedicated solely to images of various corners.

All these films are united not only in their pessimistic undertones but by a lack of color as well. The muted greys and blacks of these three films illustrate how the repetitious days of quarantine seem to drain one’s day of its regular vivaciousness and color.

There’s a wholly different tone to Julian Mejia’s Essence of Quarantine. A soft operatic melody kicks off Julians slow-motioned waking activities and is abruptly cut when he is pulling up the shades in his room to let the light in or when he’s miming the drum beat in Phil Collins’ “In the Air Tonight” as he waits for the water to boil for his coffee.

The angelic voice paired with the slo-mo is humorously intertwined with the video when Julian seems to uncover this unnatural backdrop creeping back in after short interludes where it’s absent. Pouring the cereal into his bowl, shuffling cards- for Julian, a whole new dimension of enjoyment is added to these regular activities and one can’t help but laugh at his giddy amusement.

Although the film ends with his parents questioning how much more they can take of Julians antics (his voice is loud in the background exclaiming how cool everything is now that he’s discovered this magical world of slow-motion opera movements) as the T.V. plays it’s grim coronavirus news in front of them, his movie portrays the second narrative grouping of positivity.

Most of the short films are repetitious in their content. The humour gives a cheerful vitality to Julian’s video and sets it apart from the previous group’s dulled tones. Joiizzy Dee’s Mask Off the New Norm also incorporates music as an integral element beside the masked-up main character who ventures outside his home to shop in a local pharmacy and to get a haircut. Deliberately or not, the ironic use of Future’s “Mask Off” as the background song picks up the video’s mood.

Some of the pieces are stand alone stories and classified by their individual anecdotes. Creative stories like Chaya’le Akselrod’s Covid 19 Nights depicts a one night stand turned relationship after lockdown keeps the couple in close proximity to one another, a close resemblance to the Max Nichols movie, Two Night Stand.

There’s also a creative storyline to Stuck by Monroy Jimenez. One can’t help but relate to the protagonist’s procrastination as distractions from playing his trumpet to washing the dishes deflect him from completing his school paper. In the beginning of Frank Gallagher’s For Tiki, a pep talk of becoming a long-awaited champion plays while we are taken through the main character’s room and shown close-ups of his football paraphernalia. We watch him grab his shoes, put on a headband and plant a kiss on a football poster with the words TIKI emboldened on it. We are abruptly dropped from that build up when the next shot shows a T.V. screen with a football game splashed across it. We don’t get to see a live action sweaty football game go down during quarantine, but for a good moment this film had you thinking you would.

Whatever mood one is in, there are plenty of options to choose from in the 23 film quarantine showcase. These films not only portray the range of experiences during the four month 2020 quarantine but are significant in their documentation of an unprecedented time in modern history.