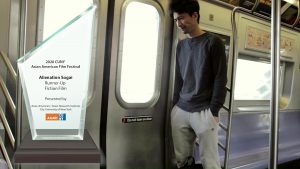 Over the summer, CUNY’s Asian American/Asian Research Institute (AAARI) hosted the 17th Annual CUNY Asian American Film Festival featuring a variety of short films made by CUNY students. Among the featured filmmakers was Nobuhiro Futaki, a recent graduate of Brooklyn College and the director of Alienation Sogai.

Alienation Sogai tells the story of Kenji, a combat student in New York who receives a surprise phone call from his father in Japan. The film focuses on Kenji’s inability to connect with his father as he masks his true feelings over the phone call and deals with his own personal struggles.

The film stars Ken, who goes by first name only, as Kenji with Nathaniel Velez, George Eliseev, Myu Hayashi, and Sakarou making up the supporting cast. It also features original music by Yuriy Lehki, another alumnus of Brooklyn College.

After the film’s screening, Futaki joined the live streamed event to speak with CUNY AARI about Alienation Sogai. Despite the film being completely fictional, Futaki applied some of his own real life situations when writing the screenplay.

“I was an international student who studied something in New York while experiencing many obstacles including [a] language barrier,” Futaki said. “I also share some of my psychology with the protagonist.”

For Futaki, this includes Kenji’s struggle to connect with his father, as well as a fear of both failure and the unknown.

“My actual father is not like the father in the story, but it is kind of tough on me to express my honest feelings to my father for some reason,” Futaki revealed. “I don’t want to show my weaknesses to my family, but on the other hand, I have been scared of hearing some bad news about my family in Japan…[which] happens to my protagonist.”

Despite this internal conflict, Futaki praised New York City as an inspiration for filmmaking and cultural diversity.

“New York City is definitely inspiring for writing and filming with many inspiring filmmakers and cinematic-looking locations,” Futaki shared. “Cultural diversity of the city helps me to see my background in the bigger picture and dig deeper into my psychology as Japanese while comparing it to psychology in other cultures.”

Psychology is a major factor for Futaki when it comes to character development in filmmaking, and this is something he wishes he explored more of in Alienation Sogai.

“If I had an opportunity to make another version of this film, I would focus more on the protagonist’s psychology,” Futaki shared. “Maybe employ a little abstract and experimental expressions to express his mentality.”

This is something Futaki plans to do in his next project: a film about a screenwriter.

Futaki revealed that it was the beginning of quarantine when he began writing the script for this next project. The Covid-19 pandemic, however, did not affect the production of Alienation Sogai.

“I don’t think Covid-19 affected my production a lot since I didn’t have anything to shoot at the time, Futaki shared. “I was writing a short script for my next project, and I am a person who needs to go to a coffee shop to write something. So the closure of coffee shops has slowed down the writing process to a great degree, and I haven’t finished with the script yet.” 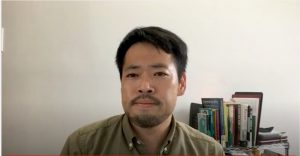 At the end of the film’s screening, Alienation Sogai was awarded “Runner-Up” in the Fiction Film category.

← Newer Post
The Closure of the Residence Hall is a Win, but Students Still Need Safe Housing
Older Post →
Journal of a Plague Year