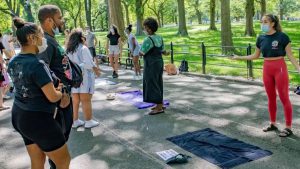 While COVID-19 has made Broadway go dark until 202, live theater is still alive and well in New York City thanks to Anna Strasser, a Brooklyn College alumna. Strasser, who received her MFA in Directing from Brooklyn College in 2018 and served as an adjunct lecturer to undergraduate theater students, is the creator and director of The Living Mural.

The Living Mural is a new approach to live theater performed at the Mall in Central Park every Saturday from 1-4 p.m. It is what Strasser refers to as “a direct theatrical response to the Coronavirus crisis in the United States and specifically New York City.”

With proper social distancing markers chalked out on the sidewalk and mask-wearing safety regulations in place, The Living Mural is made up of short, individual performances that range from original works to pieces written by household names like William Shakespeare. Altogether, these pieces make up one big picture: a mural, so to speak.

“Like a mural, we are responding to and commemorating a specific moment in time. This moment. The time for this work is now, when live, in-person performance is needed more than ever,” Strasser released in a statement. “We seek to present theater safely and without formalities: our performance is short, raw, and responsive.”

When the pandemic first hit back in March 2020, Strasser felt the impact of the shutdown on her own work. Despite COVID-19 serving as inspiration for what would become “The Living Mural,” the pandemic initially crippled Strasser’s work as a whole.

“I had several gigs lined up that all evaporated and it felt like New York City was shrouded in a cloud of fear and death and uncertainty,” Strasser told the Vanguard. “Ultimately, the pandemic had me search for what the fundamental elements of theater are, and for me it was an actor and an audience sharing space. So I sought to create a safe way to bring live theater to the public.”

Initially, when developing The Living Mural, Strasser sought advice from Tom Bullard, the head of the MFA Directing program at Brooklyn College. Upon hearing about the project, Bullard gave it his blessing.

“[Bullard] basically said, ‘Be safe! But go for it!’” Strasser shared. “I am still reaping the benefits of the mentorship from Tom Bullard and Mary Robinson.”

Aside from mentorship, Strasser’s Brooklyn College roots also provided a foundation for her work. From the people she met to the experiences that she endured, Strasser credits the success of The Living Mural to her time at Brooklyn College.

“Brooklyn College gave me the community first and foremost. Many of the actors and playwrights participating are also Brooklyn College alumni,” Strasser said. “I met some of the finest artists during my two years at Brooklyn College. They are willing, smart and brave — exactly the type of people we need to make The Living Mural a success.”

Since they first began performing four weeks ago, the reception of The Living Mural has been overwhelmingly positive. This was a relief to Strasser and the performers who were initially unsure how the public would respond to their work.

“People enjoy the pieces but also want to stay and chat with the actors — about theater, about quarantine, about life in the Coronavirus chapter,” Strasser said. “We’ve had people tell us that this is the most interaction they’ve had in months.”

Despite originally stating that The Living Mural would only perform through the end of September, Strasser told the Vanguard that performances will continue every Saturday as long as the weather and COVID-19 permits.

With autumn and the possibility of a second wave around the corner, The Living Mural may soon be forced to come to an end, but Strasser is open to reviving it in Spring 2021. 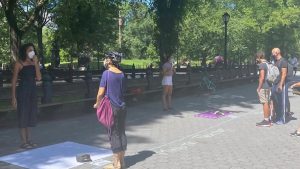 “I wouldn’t be surprised if we relaunched in the spring — perhaps with some new pieces that explored whatever our new normal looks like then,” Strasser said.

“People miss theater, but so many of us have been so isolated that this provides a moment to share a socially distanced space with someone else. And that has been invaluable for both actors and audiences.”

← Newer Post
Breaking Into the Art Market: Nancy Elsamanoudi
Older Post →
BC Prof Olasov Wants You to “Ask a Philosopher”