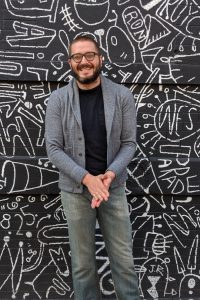 It might come as a surprise to someone walking through the colorful stands of vegetables and fruits in an NYC farmers market to see a table with nothing but two bowls filled with strips of paper, another with some candy, and a sign hanging over the edge with the words “Ask a Philosopher” emboldened on it.

One may courageously venture towards the booth and start asking what this is for or maybe launch into a problem that’s been on your mind for some time.

There is a good chance that one of those faces you are chatting with belongs to the originator of this idea, a Brooklyn College philosophy professor named Ian Olasov, who’s newly published book Ask a Philosopher: Answers to Your Most Important and Most Unexpected Questions is modeled after the conversations the table has sparked.

Although he was curious from the start, Olasov’s journey into philosophy really began in his junior year of high school when a whole new realm of understanding opened to him from his philosophy teacher Bruce Matthews’ classroom. The teachings of Plato, Paul Tillich, and Immanuel Kant opened his mind to a world constituted by thinking.

“These questions, which I had been trying to answer through reading like science fiction and reading novels, I realized that these were questions that people had actually addressed head-on. There was this whole discipline,” Olasov recalled.“This is what philosophy was really about – the moral questions and the metaphysical questions, which I cared about the most.”

The transition from the classroom to podium came in the form of a speaking series Olasov founded in the Brooklyn Public Library, a familiar forum in which ideas are engaged with and discussed. But by taking philosophy into the streets, Olasov uncovered a new type of platform, one that was more interdependent on both parties present at the discussion.

Olasov’s book format is structured after the question and answer prototype, with some interesting and humorous stories from the booth sprinkled throughout the chapters.

But one of the most distinctive features of the book is its almost whimsical construction, most apparent in the topics which range from heavier subjects like “why should I care” to the bizarre yet amusing questions like “is ketchup a smoothie?.” (Spoiler: Ian’s answer is it only becomes one when you ask that question. So for the love of all things good, never ask).

A theme Olasov explicitly details with a quote early on is that “philosophy can be both perfectly continuous for everyday life and also utterly transporting.” Olasov carried out this saying in his transition from an on-stage-lecturer to finding his seat amongst the crowd. It is also the more fundamental reason the book contains such a vast spectrum of philosophical inquiry.

Reframing how we see philosophy from ideas contemplated by the brilliant amongst us to the logical and ethical concepts we find ourselves engaging with every day is a step in the right direction.

With that precept, Olasov makes a straightforward plea to the reader to “take your thoughts seriously,” after writing about an encounter with a sharp 12-year-old girl who’s question to him at the booth consisted of comparing the great psychoanalysts Sigmund Freud and Carl Jung.

“You’ve got a brain, and you can use it,” Olasov stated simply.

Writing down your arguments, opening yourself up to human connection through discussion, and putting in the hard work to make it make sense were some follow-ups to Olasov’s initial request, but to essentially think that you can think will always be at the heart of the matter. 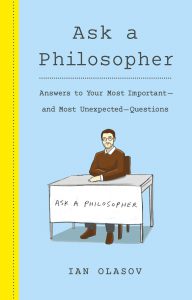 So if you happen to be walking at a farmers market (given that in due time, this awful pandemic will be but a distant memory) and you pass an almost bare table saved for two bowls on it and a sign that says “Ask a Philosopher,” let Olasov’s parting words, and his hope for what people get from his book, ring in your ears.

“I hope that people see themselves as able to participate in these conversations, and you don’t have to be some brain genius to do it. Anybody can do this stuff. That, if nothing else, is what I hope people get out of it,” said Olasov.