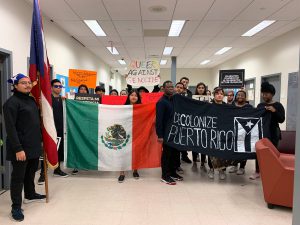 Sanabria (Far Left) at a protest./ @DanielVzqz07 on Twitter

Certainly, this piece will stir conversation. White people will say they are extremely comfortable with their positions and experiences across the college that the entire point of me writing this will be reduced to some less trivial aspect of this story. The higher ranking professors, some who will be (white) Latinxs, will say that they, as Latinxs, have never been exposed to any physical harm by a campus safety officer. They eventually reduce their calls for a cop-free CUNY to the horrible demise of people who actually have been dehumanized while coming to take a course that they probably had no money to pay for or had to work their [censored] off to pay for. However, this is not just my story, and I hope you listen and listen well.

During the entirety of this past summer the Brooklyn College administration began a huge public relations project. This project was centered on anti-racism, even when the college has been anything but anti-racist. However, the only reason this happened this year and not last year is because George Floyd’s death sparked world-wide protests that forced colleges and universities, like Brooklyn College, to readapt their neoliberal verbiage to survive the uproar of people, who have been locked inside for months, and who will most likely unleash their frustrations on these institutions once they open back up. But anti-racism is not a project you take on because you need to boost enrollment or get your face on a list of “Most Anti-Racist Colleges You Should Go To.”

Last summer, I sat down with the BC administration to talk anti-racism. I was called a liar, and that if I wanted any of it to happen I would have to do it all by myself. Absolutely no support was offered by the college and I dropped the project because, as we have seen, no project is ensured in our little Brooklyn campus without the support, both institutional and monetary, of the college.

When the first Town Hall happened, organized by David Wells, the Program Director for the Black and Latino Male Initiative on campus, I made sure to speak about policing and surveillance from the part of the NYPD in student spaces. Once again, I was gaslit and told that the college had no formal relationship with the NYPD (even when our college president has a whole statement published on the college website, from November 21, 2017, saying she sat down in a meeting with the local NYPD precinct to ensure they could use our bathrooms). It was then that our #CUNYSummerofStruggle began.

As the President of CUNY’s longest standing cultural (and activist) club, I wrote a letter and consulted all the members I knew who had worries about policing, the underfunding of our ethnic studies departments, and any other issue they believed was the product of structural racism. Our letter was out to get signatures by June 11, 2020. To my surprise, a group of faculty and staff had drafted their own letter, which was released and sent to President Michelle Anderson on June 17, 2020. We received responses on June 19 — Juneteenth. (Because why not use the opportunity to celebrate a holiday that was created by Black people during a time when, after not doing so for so many years, you have to show Black people that you care about them?)

Long story short, we got together and established the Anti-Racist Coalition at Brooklyn College, consisting of a group of students, faculty, and staff seeking to address the racism and anti-Blackness of the college in a more holistic sense. All of our proposals were immediately co-opted by the president’s Special Assistant, who also somehow serves as the Chief Diversity Officer (don’t mind the conflict of interest there) in his poor attempt to show that he has actually been working on anti-racism. (He hasn’t.)

Now we’re fed this beautiful idea of an Implementation Team for Racial Justice. Mind you, I proposed we created one last year in August, after consulting many students, faculty, and staff (we knew about this last year). Somehow people expect me to just sit and be happy that they are doing something. But what are they really doing if they rejected the same idea last year? They’re catering to students who, unlike me, are unaware of the realities of the college. (There’s not much to see when you have to run out to clock in at work after seven hours of classes.)

They stole these ideas from us. They don’t care what we have to say and there really isn’t much to say right now other than a big [censored] you. Anti-racism is no after-school project and it cannot be brought about through a committee of people who haven’t even addressed their own complicity with the systems they will suddenly bring down. The school is the system and the administration upholds it. (For a big six figure salary, they can be happy about selling the blood of our people.)

They stole more than ideas from us. They stole our time (two summers of endless research if anybody wants to know,) and they didn’t even see how stealing ideas and the unpaid labor of BIPOC students, faulty, and staff is a racist act. Therefore, I ask you, the Brooklyn College community member: now that you know this, what are you going to do? The college is lying to you, but what can you do to make sure anti-racism is a reality and not just the trending word of the day?