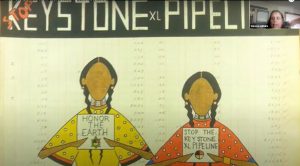 It was an unlikely forum on Sept. 23 when 2020 Hess Scholar in Residence Winona LaDuke, as well as Brooklyn College theater alums, Katherine George and AJ Cook banded together to speak at “The Citizen Artist: Performing Resistance.” Hosted by Brooklyn College’s Ethyle R. Wolfe Institute for the Humanities and Prof. Laura Tesman, the event focused on how artists address both environmental and social issues in their work across multiple mediums and treated those in attendance to some unique insight on what that process is like.

The event was originally supposed to happen last spring and was centered around Tesman’s “Devising and Collaborative Creation” class which focused on producing short plays based on social issues important to the students. Because of COVID-19, the event ultimately had to be reimagined to a Zoom format.

“The idea was that Winona [LaDuke] would watch our rough drafts…and talk about art and the ways in which it is important for artists to be engaged as citizens as well as artmakers,” Tesman said. “Citizen artists are actively engaged with the world around them.”

In Tesman’s Spring 2016 class, Katherine George and AJ Cook created Battlegrounds, a short play about a family of the last organic farmers in a post-apocalyptic world fighting against the exaggerated idea of highly addictive “chemically-altered foods and seeds” replacing natural food entirely.

“This devising class has carried me through everything else that I have done in my entire life as an artist,” George shared. “It was interesting to come together in a community to say what matters to us, how can we find more information, and how can we do something that is creative, engaging, informative, and moving ultimately to an audience.”

“We wanted it to reflect the disparity between how people have access to healthy kinds of food and who doesn’t have access to it,” Cook added. “We just knew we wanted to build this parable that kind of reflected those social situations.”

Part of the challenge for George and Cook was the limited amount of resources they had when making Battlegrounds “theatrical” as opposed to something you might see on television or in film. This got them thinking about the lighting, staging, and sound design elements they had available and how they could make them work as they were. Both consider this experience to have been an important lesson for them.

“I have been blessed being able to continue to create art and to say…what can I do with the resources that I have available to me right now?” George said.

“[It] really revitalized us and helped us figure out new different types of ways to attack and come at the idea or the story,” Cook added.

The panel continued with Winona LaDuke and her presentation on Native American Art and Indigineous Resistance. LaDuke, an environmentalist and economist, provided visuals of different artworks, some of which included herself. A majority of these pieces were ledger art or images produced on accounting paper that Indigineous peoples used to assist in the passing down of historical events via oral tradition.

“What we did is we took the historic art forms and I said let’s just record historic events or events that are going to happen with them,” LaDuke said. “And so we started commissioning artists.”

One of these artists is Michael Horse, who created a ledger artwork depicting the installation of a wind turbine in South Dakota featuring LaDuke, her son, and members of her team, as well as another piece that depicts the death of the Keystone Pipeline or what LaDuke refers to as “the slaying of the black snake” by the hands of LaDuke, other Indigineous people, and Cowboys on horses fighting in unison.

LaDuke also showed a ledger artwork created by John Pepion which depicts two women protesting the Keystone Pipeline. LaDuke can be seen in the yellow dress holding a sign that reads: “Honor the Earth.”

“If your art is recording your history, this is how we are recording it now,” LaDuke said. “These artists are doing the work for the movement and I just want to express my gratitude…for all of them.”

LaDuke also provided visuals of other resistance art pieces that did not feature her specifically, such as a “winter count” piece that was made of buffalo hyde and included symbols for record keeping and the works of Isaac Murdoch, an indigenous artist from Northern Canada, whose works focuses on fighting oil companies and represents the prominence of these older art forms.

Besides ledger art, resistance art can include utilitarian art forms such as clothing designs, a village of murals painted on the walls of housing projects, and the use of red coloring in pieces to represent Indigineous women.

Among the larger works that LaDuke focused on was Charles Rencountre’s “Not Afraid to Look,” a larger-than-life sculpture of man sitting with his knees up and legs out that is located at Standing Rock in the Dakotas.

“The only physical evidence that there was this resistance struggle there is this giant, giant statue,” LaDuke said. “This piece is really just a piece of resistance.”

This idea of resistance in Indigineous art not only resonates with LaDuke, but it is something that she, herself, has tried to represent. LaDuke showed those in attendance a picture of a billboard that depicts LaDuke with five other women wearing beads and red to honor all indigenous women.

“We have five billboards in Northern Minnesota that are resistance art, and they are in the middle of really conservative areas of Trump supporters,” LaDuke revealed. “I am just happy that I get to smile on them all as they drive by.”

As the event came to a close, Winona LaDuke, Katherine George, and AJ Cook fielded questions from those in attendance including why resistance art may be met with pushback and how to stay motivated.

“When you are revealing a truth or talking about something that is not often talked about, it just simply makes people uncomfortable,” Cook warned. “Do not let people’s reception of your art be your main barometer of success.”

Based on her own experiences encountering the erasure of Indigineous people, Winona LaDuke advised students to stay motivated by making themselves visible and not being afraid to get in people’s faces.

“Being who you are is definitely a revolutionary act,” LaDuke said. “Stand for the art that you are.”

← Newer Post
On the Record: “What You Gonna Do When The Grid Goes Down?” Public Enemy
Older Post →
Theater Dept. Unveils Fall Plans