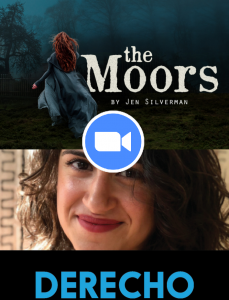 “The Moors” by Jen Silverman and “Derecho” by Noelle Vinas will be performed on
Zoom./ Photo edited by Humza Ahmad

Earlier this month, the Brooklyn College Department of Theater officially unveiled their plans to continue productions for the Fall 2020 semester.

In an email sent out to all students within the department, Professor Sabra Shelly announced two virtual productions for the season, complete with directors and cast members. Both plays, The Moors (MFA) written by Jen Silverman and Derecho (BFA) written by Noelle Vinas, are set to be performed virtually on Zoom at some point this fall. The details regarding performance dates and times have yet to be announced.

“Normally we would have announced the casting for all of the fall productions this past spring but these are not normal times,” Shelly said in her address to students. “We have all been challenged by COVID — putting health at risk and making on-campus classes, rehearsals, and performances impossible.”

The impact of the pandemic took a toll on all arts programs on campus, making it difficult to finalize plans, productions, and casts across the department. Under normal circumstances, in order to prepare for productions, the selection of directors and casting happen during the semester prior to the season.

This semester’s announcement of productions came late, due in part to the pandemic, but also because of the recent list of demands from the newly formed BC Theater Student Coalition.

Earlier this summer, students of all concentrations within the department formed a coalition committee and a list of demands to ask for change within the Theater Department. These demands included changes that would allow for  more BIPOC students and staff to have more of a voice and representation in the department.

In addition to the guest directors, late announcement of shows, and student demands, Helen Richardson, the Artistic Director for the Department of Theater, announced she would step down from her position. Neither Richardson nor Kip Marsh, the chairperson of the department, responded to Vanguard’s request for comment.

Despite this, Professor Sabra Shelly released a statement via email assuring students that the department is still taking their concerns seriously.

“We are hard at work responding to your needs and will also be posting a detailed statement addressing concerns that have been raised by students in regards to Theater Department policies as pertains to the season, artistic choices, and respect for the needs of the diverse Brooklyn College Theater Department community,” Shelly wrote.

“We can assure you that it is our priority to continue to propose more fall productions and further audition opportunities will be announced in the very near future.”