“Let’s put our heads together and create a brighter future for our children.” 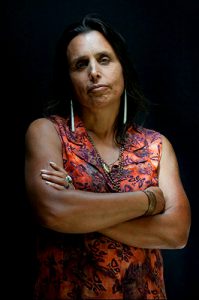 Originally spoken by Hunkpapa Lakota leader Sitting Bull, the 2020 Hess Scholar in Residence and rural development economist Winona LaDuke echoed the words in her lecture dubbed Lighting the 8th Fire, Economics for the 7th Generation, as she expounded on ways to relocalize our economy and energy sources.

The message of hope remained steadfast throughout the lecture, even as LaDuke explained that she sees the environmental crises and current pandemic as an outgrowth of the Wendigo (canibal) economy that takes without giving.

“The idea that was crystallized in Standing Rock that the rights of corporations have superseded the rights of individuals — that must be changed,” she emphasized.

Although constrained to an online forum, LaDuke’s energy translated through the screen from her reservation in  Minnesota. Drawing from her past, she offered listeners a story that inspired her as a Harvard undergraduate years ago when her father came to visit her in Boston one semester.

“He said to me, ‘I don’t want to know your philosophy if you can’t grow corn,’” she said.

Besides being a hemp farmer for five years with an interest in rebuilding the hemp industry in this country, LaDuke has been leading the charge to normalize the relocalization of our food sources and move towards renewable energy.

And some of those first steps include moving away from our current globalized economy towards a pre-agricultural system like the ones indegenious people have been known to uphold. LaDuke maintained that our current systems have only enabled the virus to spread as quickly as it did.

“We have always been told that bigger is best,” she said. “Turns out that economics of scale is not a resilient plan, nor is it a stable plan when there is a big crisis because it cannot change quickly.”

Mother nature doesn’t love when we don’t give her the respect she demands, and LaDuke called out the biggest tar sands oil corporation in Canada. Located in Alberta, she labeled it as just one of the many companies that has been leaving the highest and dirtiest carbon footprint in the world.

Thus, she explained another major part of the Sitting Bull plan — shifting energy away from  fossil fuel companies to renewable sources.

Perhaps highlighting an earlier comment that “the minds that got us into this mess are not the ones who will get us out of it,” LaDuke introduced an example of a woman named Melina Laboucan-Massimo, who is known for installing 20 kilowatts of solar panels in a solar project for her community of Little Buffalo, Alberta.

“Visionary people will figure out a system that is powered on electricity and renewable energy sources,” LaDuke said, once again inserting hope into the grim situation.

LaDuke is not alone in the fight. Mentioning that America and civil societies all over should take note, she spoke about the actions of former Bolivian president Evo Morales when he became the first to affirm the rights of nature in the Bolivian Constitution.

This is what she meant when she began her lecture by saying that we should make America  great again — moving back to a time when there was tremendous biodiversity and respect for the land.

“America was great when the skies were blackened by passenger pigeons and when you could drink the water from every stream,” she explained.

The connection to that point came at the end of her lecture when she was asked what the individual can do in face of this overwhelming problem. After giving pointers on asking about where your food comes from and planting in local good gardens, LaDuke ended with a simple request: “Just try to do your best everyday.”

Web Group is a group @ Brooklyn College
View all posts by webgroup →
← Newer Post
Who The Nets Can Take in Round 1
Older Post →
Chavela, Frida, and La Llorona, BC Hispanic Heritage Month Event