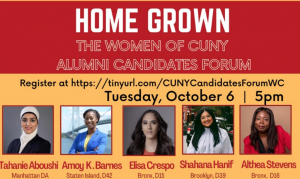 “Home Grown: The Women of CUNY Alumni Candidates Forum,” an event hosted by the Women’s Center and
Shirley Chisholm Project at BC./ Bulldog Connection

To commemorate the 19th Amendment and 55th anniversary of the Voter Rights Act, the Women’s Center and Shirley Chisholm Project at Brooklyn College hosted an online event called “Home Grown: The Women of CUNY Alumni Candidates Forum.” Five former CUNY students turned grassroots candidates shared how they will build progressive communities across New York City. In the coming year, these women plan to take on local elections to pursue racial justice, affordable healthcare, defunding the police, and other social equities. Though they will face some challenges to implement systemic change, they are ready to reimagine the city’s political system.

“We really want everyone to have access to these amazing women who are running for office, who are really running in the legacy of Shirley Chisholm,” said moderator Zinga Fraser, Director of Shirley Chisholm Project, whose organization works to maintain the legacy of Chisholm, a BC alum herself, who advocated for progressive women to run for office.

Four of the five guest speakers are running for City Council to represent their prospective district. Representing Brooklyn’s District 39 is Brooklyn College alumna Shahana Hanif, who fights for street vendors, non-English speakers, undocumented immigrants, and other disadvantaged communities who are often overlooked. From the Bronx, candidates Althea Stevens (D16) and Elisa Crespo (D15) are seeking to better the livelihood of residents who collectively experienced “a pandemic before COVID-19,” having high rates of pre-existing conditions like asthma, diabetes, and unemployment.

Running for District 42 of Staten Island, dubbed “the underestimated borough,” is Amoy K. Barnes, who pledges to tackle all challenges her community faces. Another candidate, who is running for District Attorney in Manhattan is Tahanie Aboushi, a civil rights lawyer. She has dedicated her life’s work to hold those in power accountable through her litigations, including the NYPD. If Aboushi wins this coming election, she will become the first female and person of color to be Manhattan’s DA.

Though each woman shares similar ambitions for uplifting the people of NYC, they have different upbringings and influences that drove them to the political podium.

At only 17, BC alum Hanif was diagnosed with lupus. She survived and persevered through many life-threatening health challenges — which ultimately made her stronger. As an undergrad, she organized with her peers in protests that called for changes to the CUNY system, such as removing on-campus policing.

For Bronx-native Stevens, her strong advocation for youth communities comes from her experience being a teenage mom at the age of 16. After being told by many youths to run for local office, Stevens felt the need to comply after witnessing the lack of representation they have in government, which contributed to their lack of political engagement.

“I keep telling people that my job is just to be here to get young people across the finish line,” said Stevens. “I need to help to make sure that our kids are inspired and ready to go because we have a long fight ahead of us.”

To Crespo, whose journey in local politics first began in 2015, the looming economic collapse and climate change the country faces are some of the many reasons she decided to run. One of her biggest influences is US Senator Bernie Sanders, and the leadership opportunities she was able to find as a John Jay undergrad.

After volunteering for the Peace Corps in Morocco, grassroots candidate Barnes decided to change her career plans completely. Though she planned to become a lawyer, she re-evaluated her own communal involvement after speaking to Moroccan youth about standing up for what’s right.

When she was 14 years old, DA candidate Aboushi’s father was sentenced to 22 years in prison. Overnight, her mother became the head of the household for ten children, including Aboushi. While sitting in her father’s hearing, alongside her siblings, Aboushi distinctly remembers the judge paused for a moment and asked the prosecutor, “What are you going to do with all of these kids?”

“And without hesitation, she said, ‘They’re not my problem.’ And so that was the moment that the system became my problem,” said Aboushi.

Throughout the event, all candidates shared a common goal for their political agendas in office: the defunding of police and reallocation of such funds to communities. Generally, the grassroots leaders agreed that there is a heavy reliance on police to handle issues that can be addressed locally, such as homelessness or the enforcement of social distancing.

In light of the marches against police brutality, legislation such as the chokehold ban are becoming enacted, Aboushi explains.

“We had legislation that was sitting on our governor’s desk, and was sitting in City Council for years that would not pass. And in June, they all passed by majority, in one shot in response to the will of the people,” said Aboushi.

However, despite these changes in legislation, other systemic issues that evoke and contribute to racism in America will remain present. For BC alum Hanif she plans to confront the anti-Blackness rhetoric rooted within society by promoting the deep political education work that will aid in forming local coalitions.

As 2020 comes to a close, local elections for City Council and the District Attorney’s Office will soon approach. But in the meantime, these five progressive CUNY alumni will continue to aid their city by tackling one social injustice at a time — carrying on the lessons that shaped them into the leaders they are today.