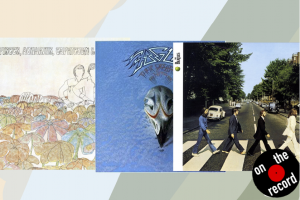 You can learn an awful lot about a person based — rightly or wrongly — on their musical preferences. These choices can make or break first dates, inspire lifelong, deeply personal grudges, and, in the best of cases, serve as united common ground. It functions as a prime aspect of how we identify ourselves to others.

We, as voters, have heard plenty about Joe Biden’s policy pitches and his plans to steer America back towards something that resembles normalcy, but one thing I’ve yet to hear: Mr. Vice President, what is your favorite album? I took to social media to ask the constituents of this country what they believed it to be.

“He’s old, he definitely used to smoke pot, but he also has bad taste.”

“I can’t picture him listening to Lizzo or Kendrick Lamar.”

(President Obama has become well known for his annual list of songs he uses as the soundtrack to his own life.)

(This album got suggested not once, but twice. I can see it, he’s got a world of trouble on his mind.)

“It’s ol’ white guy fer sure, but not music nerd ol white guy…He should put the top down on that vette, throw on those dark aviators and pump some DM ‘Violator.’”

(Perhaps Biden should start campaigning from behind the wheel of his car.)

“Because it’s nice, but a bit lightweight and not in the same league as when he was with the other guy…I’ve just realised you’re American and so this may not make any sense to you. Were Wham big in the US?”

“1) The harmonic, we all know Joey B. digs the French harp. 2) To hell with Momma not dancing, it’s about the B-side for the former VP. “Till the Ends Meet,” and its prelude instrumental, “Just Before The News” are, according to Joe, bangers.”

“Because he is one persistent politician.”

“The safest pick from the most mainstream band of all time.”

The people have spoken. I won’t bother to ask the peanut gallery for their thoughts on Trump’s favorite albums — it would be a waste of time considering I’m not sure he’s ever listened to music, much less enjoyed it. (Can you envision Trump at a…concert?) But for Biden, I can’t help but imagine him turning up the dial on the radio of that beloved green Corvette and heading on down the road.

← Newer Post
It’s Not Over Yet: Learning from History (Or Not)
Older Post →
Actress Juliet Mills Discusses Life and Zoom Theater with BC Students