After being in the works since last November, the Queer Student Action Alliance (QSAA) has officially become a Brooklyn College club. Under the guidance of Club President Kyle Reese and Vice President Nick Cevoli, QSAA aims to embrace and unify the Queer community by taking action against issues that are faced by Queer students at BC and CUNY-wide.

Reese is in his fourth year at Brooklyn College completing his BA in Queer Psychosocial Research and Cevoli majors in Healthcare for Disenfranchised Populations. Together the duo has worked closely with the LGBT Alliance for ressources, student government to discuss club funding, and the Women’s and Gender Studies Program.

Through their collaborations, activism, and volunteerism, QSAA has addressed issues within their community as well as educated the BC student body about gender. From fighting for gender pronouns on student identification cards to advocating for more gender-neutral bathrooms on campus, QSAA has taken the pledge to work towards social and policy changes. “I’ve heard of students getting their IDs taken away if their picture doesn’t match their name or their appearance didn’t match the gender of their name, so they weren’t being granted access to campus, and their IDs were being withheld from them,” said Reese. “We wanted to change it so we started coming up with ideas,” he said. And as of now, there is only one gender-neutral bathroom in the William James Hall building on the entire BC campus, and that remains an issue they hope to tackle in the near future.

“Transgender people and non-binary people, they don’t really have a place to go to the bathroom. That can cause a lot of mental health, physical health, and grading issues,” said Reese, citing the inconvenience of the time it would take for someone to get to that one bathroom and back.

The QSAA provides and welcomes a space for anyone who wants to be a part of it. “People are afraid of gender, they hear something that messes with their concept of gender, and they freak out and there’s really no reason for that. If we can teach people in a place where it is safe to learn about it, then I think it would be much more helpful,” said Reese. He hopes to create a social atmosphere at Brooklyn College and CUNY to provide an open perspective on the Queer community. “We try to make it as open and as accepting as is for any other student on campus, which is important for the student’s success,” said Reese.

Reese and Cevoli have used their social media platforms like Twitter, Facebook, and Instagram to make announcements and keep their audience engaged with the club. “I want to keep pushing that motivation to change things for the better and support one another,” said Cevoli. He feels it is important for QSAA to set the tone for CUNY schools and their attitudes towards the Queer community.

On their latest Instagram post, the QSAA commemorated “Coming Out Day,” a day in which people of the LGBTQAI community embrace and reflect on the first time they publicly expressed their gender identity or sexual orientation. QSAA encouraged students to tell their stories and showed support to those who did. . 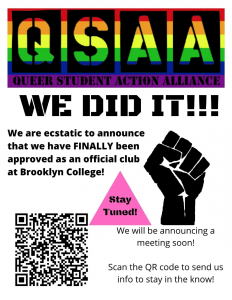 Reese and Cevoli shared how the pandemic has affected their plans for the club. Since school went online, the process in going forward with QSAA has been slow. If they were on campus, they would be able to spread the word with flyers all around, but for now, they look to social media to connect with students. “It’s a tough time for everything going on right now, and I think we all need to be there for each other,” said Reese.

These setbacks, however, are no match for the vision that these founders have for the club’s future as they continue fighting for the civil rights of BC Queer students and beyond.

About webgroup 426 Articles
Web Group is a group @ Brooklyn College