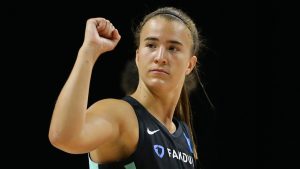 It has been a challenge to be a New York sports fan; the Mets, Giants, Jets, and Knicks have all constantly missed the playoffs as of late. But the city has always been able to bring in new stars, such as Saquon Barkley, Aaron Judge, the Nets’ recent acquisitions of Kevin Durant and Kyrie Irving, and it seems like there will be another one soon. Sabrina Ionescu is one of the best College athletes in college sports history, and she is now the new face of the New York Liberty, adding a new face of superstardom to the empire state.

Sabrina Ionescu is by far one of the most decorated college athletes ever in men’s or women’s basketball. In her four years at Oregon, she scored 2,562 points, collected 1,040 rebounds, and had 1,091 assists. She is the first college athlete ever to do that. On top of that, she was able to rack up many personal trophies such as the Weeden Award and Wade Trophy, both in back to back years in her junior and senior year. Along with that, she led the Ducks to three consecutive PAC-12 Conference Championships.

Due to all her accomplishments, it was not a surprise when the New York Liberty drafted Ionescu first overall in the 2019 draft to continue their rebuilding with one of the brightest stars in women’s basketball before she even played a game of professional ball.

The Liberty were in desperate need of a new star after a significant drop off following sustained years of success. They were one of the Eastern Conference’s best teams, attaining the best record in three straight seasons from 2015-2017. However, the team started to fall apart, and in 2018 had the second-worst record in all of the WNBA, and the following seasons wouldn’t be any better, then tying for the second-worst record.

Instead of just drafting Ionescu and trying to run it back with a similar team, hoping Ionescu would be enough, the Liberty went into a full rebuild. They traded away their best player, Tina Charles, in a three-way trade that landed them the 9th pick, 12th pick, and the 15th pick in the 2019 draft. The Liberty ended up with three first-round draft picks and the first and third picks in the second round, adding up to five picks in the first 15 overall picks.

This allowed the Liberty to draft a whole new starting lineup, but more importantly, it added youth and talent to the team and showed Ionescu was going to be the team leader from day one.  They drafted a shooter in Megan Walker, another good overall scorer in Jazmine Jones, a defensive big in Kylee Shook, a scoring big in Leaonna Odom, and an excellent solid prospect in Erica Ogwumike. These draft selections were  made to make Ionescu shine into possibly one of the best players the WNBA has seen.

The upcoming season looked bright, with a young new roster, but with only two players over the age of 25, not much was suspected. Everyone would finally see Ionescu in the pros and see what she could do on the next level. It almost didn’t happen altogether because of the Coronavirus Pandemic, but eventually, when the WNBA bubble opened up, Sabrina Ionescu shined.

Even though Ionescu didn’t shoot well, only making 4 of 17 shots and missing 8 three-point attempts, she still had 12 points with 6 rebounds and 4 assists in her first game. Her second game, however, would show off her true future potential.

Ionescu went off for 33 points on 20 shots, making 11 of them, and on top of that went 6 of 10 from three-point range. She then finished three rebounds and three assists short of a triple-double, putting the whole league on notice. Sadly, that was her last full game; in the middle of putting on another strong performance, she twisted her ankle that sat her out for the rest of the shortened season.

Of course, the team suffered losing its best player early and finished the regular season with a dismal 2-20 record. The good thing is that the team will hopefully have grown because Sabrina Ionescu will be back next season to show again how much of a star she is.