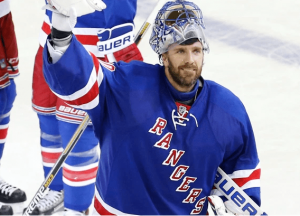 After fifteen years as the face of the franchise, the king has now left the building. Henrik Lundqvist ends his career with the New York Rangers as he prepares for the next chapter of his life with the Washington Capitals.

This comes after the Rangers organization bought out the legendary goaltender’s contract in his final year back in September, thus making Lundqvist an unrestricted free agent. The deal saves the Rangers $3.7 million for next season.

The Washington Capitals’ organization has signed the 38-year old player to a one-year contract worth $1.5 million. It’s worth mentioning that after the Rangers bought out Lundqvist, there were fears that he would retire. However, there is still unfinished business in his NHL career.

In a tweet, Lundqvist made it known his main mission when he goes off to Washington: “A new journey begins with ONE goal in mind. I’m really excited and grateful for the opportunity to join the Capitals. See you soon, DC!”

The five-time all-star player led the Rangers to many playoff appearances, including a memorable Stanley Cup Finals run in 2014. He is the all-time franchise leader in wins and shutouts in both the regular and postseason, as well as a gold medalist playing for his homeland Sweden in the 2006 Winter Olympics.

Unfortunately, he has yet to hold up the coveted Stanley Cup trophy that keeps slipping away from him. He hopes to go the distance when he starts the new season in a different uniform.

As painful as that sounds to the hearts and minds of many Rangers fans that have seen him play in Madison Square Garden, Lundqvist’s home stadium since 2005, this also opens a new chapter for young promising goaltenders in New York. They have big shoes to fill in taking Lundqvist’s place as starting goaltenders, but success is when opportunity meets preparation.

Prospects like Igor Shesterkin and Alexandar Georgiev, both 24 years old, are determined to make their marks in the Garden.

Again, fans will have to face the fact that their most cherished player will not only depart from the big apple, but he will also be playing with their Eastern Conference rival. Fans may have to get used to many tweets and photos of him getting comfortable in his new locker room, enjoying the sights of D.C, and probably helping the Capitals post big wins in a race to top the eastern division.

But New Yorkers still have the greatest moments and exciting playoff runs to look back to. Lundqvist may be leaving New York, but in the process, there’s no doubt that the Rangers organization has become a better force to be reckoned with thanks to him.

Back in September, in a series of tweets, Lundqvist wrote a lot of heartfelt thanks and sentiments to a place he has called home, recognizing both the organization and the fans who’ve made him feel proud to wear the red, white, and blue uniform. There is no doubt by the time he does retire, the Rangers will also retire his #30 jersey and hold it up high inside MSG for all to see.

“Playing for a franchise with such passionate and committed fans makes all the work you put in worth it. Winning at The Garden always gave me so much energy, joy, and satisfaction. Thank you for all your love and support, Ranger fans! I will NEVER forget you!” he said.

“This great city has now been my home for a long time. So much to love about this place. Sure, it’s not always perfect but pretty close. I know we are facing some challenges as a city so let’s do what New Yorkers do best, come together and get back to where we want to be!”