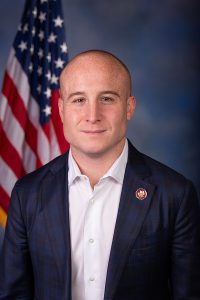 11th District’s Max Rose who lost his seat in this years election. / https://maxrose.house.gov/
about/

After weeks of early voting, and the counting of mail-in ballots, Brooklyn remains mostly blue. In addition to the presidential race, State Congressional Democrats campaigning to the constituents of Kings County outperformed Republicans in most contests except for in districts to the south and those who share ground with Staten Island.

Even as absentee ballots continue to be counted, Joe Biden has so far secured over 514,000 votes from the 1.5 million registered voters in Brooklyn, beating out the president’s 174,ooo votes. With a clear victory for Biden, Trump has thus far secured more votes in NYC in 2020 than in 2016, thanks in part to central and south Brooklyn. The continued accumulation of mail-in ballots, however, is expected to increase Biden’s number.

elections except for the 11th District’s Max Rose. Rose made waves in 2018 when he beat the incumbent Republican congressman, Dan Donavan. The district, which encompasses Staten Island and several southern Brooklyn neighborhoods like Bay Ridge and Dyker Heights, has turned red once again, with a strong Sixty/Thirty-Nine showing for Trump and the election of Republican Nicole Malliotakis to the State House. The district’s constituents in Brooklyn voted less enthusiastically for both Trump and Malliotakis than the Staten Island contingency, but not enough to let Max Rose hold on to his seat.

Incumbents Nydia Valazquez (7th), Hakeem Jeffries (8th), Yvette Clarke (9th), Jerry Nadler (10th), and Carolyn Maloney (12th) all held their districts. In addition to holding their seats, most of these candidates had a sizable portion of their votes come in on the Working Families Party line which passed the threshold needed in order to remain on the ballot in coming elections. These Democratic Representatives will rejoin a House whose majority is already staunchly blue.

Democrats running for the New York State Senate seats in King’s County performed similarly to their comrades in the Assembly. The Working Families Party once again competed for votes from the Democrats with the likes of Julia Salazar, Jabari Brisport, and Zellnor Y. Myrie. While these candidates received the great majority of their votes from the people filling in the Democrat bubble, the WFP’s showing in Brooklyn this election has breathed enough life in it to meet their goal of continuing to field left-leaning candidates in the future.

This year’s election didn’t drastically shake up the political fabric of Brooklyn. As the city Board of Elections continues to count mail-in ballots, the borough remains represented primarily by Democrats in the State Senate and House of Representatives, and the Democrats’ candidate for president received over seventy percent of the vote.