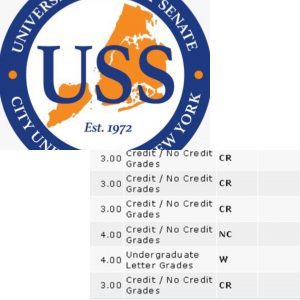 The USS has voted in favor of a resolution extending the credit/no credit policy./ Collage by
Humza Ahmad

The University Student Senate has voted unanimously in favor of a resolution extending the credit/no credit policy for the Fall 2020 semester. The vote, which will bring the resolution up to the CUNY Board of Trustees, has a small chance of adopting the policy, which was supported by Brooklyn College’s Undergraduate Student Government. However, USS members doubt that the Board will decide to adopt the policy for any semester.

The resolution, which was passed on Nov. 29, calls for the continuation of the Spring policy which allows students to receive credit for a class instead of a letter grade. This has become a major sticking point for students amid the stresses of learning during a pandemic. Last month, Resolution 008 was passed by BC’s USG, and the USS is now following suit, sending their own resolution to Chancellor Félix V. Matos Rodríguez, University Provost José Luis Cruz, and the CUNY Board of Trustees for consideration. The Board of Trustees ultimately will decide whether to formally adopt the policy again.

“University Student Senate stands in solidarity in support with CUNY campuses advocating for the implementation of the CR/NC policy and a continuing of a flexible grading policy,” the USS resolution reads. “The CR/NC policy can provide a safe buffer for students who may not be able to perform their best due to the unprecedented state of the pandemic and the nation.”

“Students are still struggling with online learning,” BC student and USS Alternate delegate Kyle Reese told the Vanguard. “Also, students’ families are still getting sick, or dying.  They’re still struggling economically. Sure, we’ve had time to adjust to the online learning environment.  But the pandemic and every horrible thing that comes with it hasn’t changed.  So, why should grading policies?”

The vote to continue the policy was unanimous among the body’s 56 members, including Brooklyn’s main delegate and BC’s USG president Ethan Milich.

“The reason why I voted the way I voted was because of the students – the average student, who is going through all the difficulties and turmoil that most of the student bodies and even the faculty and administrators are going through,” Milich told the Vanguard. “We have jobs, we have families, we have so many duties and responsibilities to take care of and focus on, and to uphold that same standard under normal circumstances is unfair and unjust,” he said.

Milich, however, is doubtful that the resolution will be passed and adopted by the CUNY Board of the Trustees. The USG resolution was sent to the Board, as well as to Brooklyn College’s administration, and was dismissed by both. USS brought up the credit/no credit policy to Chancellor Rodríguez at the beginning of the semester and received a similar dismissal. Milich doesn’t believe USS’s resolution will have any more luck, despite its support from student members across the CUNY system.

“They made the right call last semester, and it’s very important that they do it again this semester, but I don’t think they’re going to,” Milich said of the CUNY trustees. If the Board decides to go against the resolution, Milich says he and the rest of USG plan to fight for the policy for the spring semester. “I think we’re going to have to get loud,” he said.