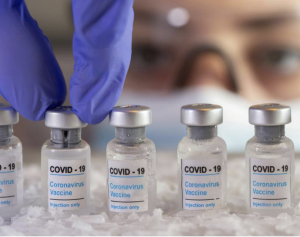 As the country marked its most COVID-deaths in a seven-day average, with a 2,249 count last week, advancements in vaccine approval and distribution plans are underway. New York is slated to receive enough Pfizer doses for 170,000 people by Dec. 15 once all emergency vaccine approvals are granted. But for now, the Brooklyn College community and other New Yorkers must wait for final calls to be made.

“At first, I was skeptical of it, but now I have faith in science,” said Mohammad Tusar, a pre-medical student at BC. “Because you know, at the end of the day, if we’re trying to get out of this pandemic, we have to have faith in people who are actually truly trying to help us.”

Though 60 percent of Americans say they would take the vaccine, another 21 percent are adamant about not receiving a dose, according to a Pew Research Center study. With his future set in the medical frontlines, Tusar has looked onto public health experts like Doctor Anthony Fauci, director of the National Institute of Allergy and Infectious Diseases. To Tusar, the leading epidemiologists’ ability to develop a vaccine together, with personal ideologies set aside, demonstrates medicine’s purpose: helping communities.

“We already lost a quarter-million lives, and each death is heavy on people in the field, but it’s also heavy on us [pre-med students] because we’re also going to go into this,” said Tusar.

Though some changes may develop with further research, or a mistake in mass-producing doses may occur, some risks in taking the pending vaccine must be taken for safety, Tusar argues. To Mariluz Luna, a BC student majoring in computer science and business, though she may be inclined to get the vaccine if the people she trusts say that it helps them, she still has her doubts.

“I don’t know. Vaccines can be risky, like the flu shot,” said Luna. “Some people may not get sick after, and some people do. Once you get the vaccine, you can probably get better or not. It’ll probably take you some time to fight the virus after the vaccine.”

Luna thinks that the end of the pandemic will need more than the vaccines, but a continuation of mask-wearing, social distancing, and self-isolation when exposed to the COVID-19 virus. However, following these basic guidelines may not be possible for some, especially for undocumented people who test positive and cannot take off from work, she says.

“You got to get some type of income coming into your home,” she said. “And that’s why I also think about how other countries are handling the virus to. Other countries how they were handling it was that they shut down everything, but they were also providing income that was sustainable for things besides rent.”

For other BC students, their concerns are centered on how the vaccine will be administered. For instance, the Pfizer vaccine requires two doses to be given — the second shot three weeks after the first one. Mia Galeano, a BC political science major, questions if the vaccine will not work if these instructions aren’t followed. Though she has these worries, she recalls her childhood memories with her mother at the doctor’s office to remind her that vaccines are useful.

“What reassures me is growing up with my mom being a nurse, being transparent when I was little and telling me, ‘Okay, we’re going to get you this shot. It’s for you not to get sick,’” said Galeano. “It was very dramatic at the doctor’s office because the needle is scary, but I’d understand ultimately I’ll get this, and I’ll be safer than I was.”

“I’d still choose to take it just for a safer society — to feel safer than we did this whole year,” said Galeano.

Given that the initial vaccine delivery would cover a fraction of New Yorkers, talks of who should receive the doses first have begun. Per the Center for Disease Control’s recommendations, NYS will distribute the first batch of vaccines to healthcare workers and nursing home residents. For Tusar, though he understands why the state would prioritize those on the frontline, he thinks they may not need it.

“They’ve already been in that environment, so there’s a strong possibility they already have immunity to it because they developed it naturally,” said Tusar. Alternatively, he thinks that the youth should receive the vaccine first.

“I feel like it should be going to us, as the younger generations, because one: our bodies are more fit for it. If you give it to an elderly person, they may show more severe symptoms where their body may have a harder time fighting it back,” Tusar said. “And we’re the generation — the group of people — everyone’s afraid of because we don’t follow the restrictions.”

By contrast, Luna thinks that the vaccine should first extend to essential workers, who keep the economy going despite running the chance of contracting the deadly coronavirus.

“I don’t want to say it should be mandatory either, because that’s going against somebody’s will. But I feel like people who do their work out there and risk their lives, maybe they should choose if they want to get the vaccine. And people that are sick from the virus, should go after,” said Luna.

Despite the looming uncertainties that BC students and other Americans may have about the pending Pfizer and Moderna vaccines, some will continue to hold on to the possibility that the doses would finish off the novel COVID-19 pandemic. As of press time, New York City’s cases have surged over 334,000.

“It’s going to be still a bit until the whole public has it, of course, but I think it’s a means for hope to something I didn’t have so much in the beginning, “ said Galeano. “There is actually, maybe a possible end to it.”