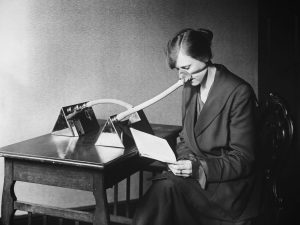 A woman wearing a mask to protect herself from the 1918 Spanish Flu./ Hulton-Deutsch Collection/Corbis via Getty Images

Does history repeat itself? The Spanish flu (H1N1) of 1918 had three waves. The first wave was in March 1918, but the infection rate dropped down in the summer. Sound familiar?

Any Coronavirus spreads faster in the winter, because the air is less humid so the virus can last longer in the air. Plus, our nasal membranes are drier, which makes it easier for us to catch it.

In 1918, there was a third wave between the end of the winter and start of spring of the following year. The third wave ended by the summer of 1919. Life expectancy actually dropped 12 years. Overall, the Spanish flu killed one third of the world’s population. Of course, there has been 100 years of medical advances since the three waves of the Spanish Flu, but does it matter if people ignore the medical advice?

As much as things change, they also stay the same. Each time, the US Presidents downplayed the virus, and yet came down with it themselves. President Woodrow Wilson, who, for political reasons, had been downplaying the virus that killed hundreds of thousands of Americans, fell violently ill with the same virus, but survived. Some argue that the timing of this — at the Paris Peace Conference — caused Wilson to be unable to negotiate. Therefore, the United States accepted draconian terms of surrender for Germany put forth by France, which lead to Adolf Hitler and World War II. Ironically, Wilson won the Nobel Peace Prize.

Fun fact: the Spanish Flu never really went away. It came back as a seasonal flu years later until humans adapted to it. In 2009, a relative strain of Spanish Flu came back to trigger another pandemic, albeit a much smaller one.

This weekend, former New York City mayor and President Trump’s personal attorney Rudy Giuliani was hospitalized for COVID-19 in Washington D.C. Giuliani grew up in East Flatbush, which is not exactly where Brooklyn College is located, but not too far from it. He is one of the over 14,462,527 total cases COVID-19 in the United States so far.

The COVID-19 pandemic and the Spanish flu’s parallels are hard to miss even upon a cursory inspection of the histories.

← Newer Post
On The Recrod: Tom Petty & The Heart Breakers, The Final On The Record
Older Post →
Should We Come Back?