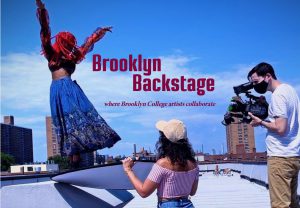 The Brooklyn College Theater and Film Departments have launched a new online initiative, Brooklyn Backstage, a service to aid students in finding projects on campus and enable one another to get involved in creating art.

Brooklyn Backstage is the brainchild of Patrick Sabongui, the new head of the BFA Acting program on campus. The platform allows students to create profiles including their abilities, headshots, and resumes. The website also allows students to post to message boards in an effort to find actors and designers for various projects. The website is similar to the commonly used Backstage.com, which is used for finding talent for productions.

“There are always actors looking for filmmakers, designers looking for directors, etc.,” Sabongui told the Vanguard. “So let’s bring them together.”

The idea for Brooklyn Backstage came about after Sabongui recalled his undergrad years and how he would create a binder of all the student artist’s resumes to present to neighboring film schools in California.

To create a new and improved version for Brooklyn College student artists, Sabongui teamed up with Graham Schmidt, a New York City-based filmmaker and professor. With an indie-film style approach, the two created the website with little to no money and simple software, making it accessible to all who qualified.

The result was a hit. Students and faculty on campus use the website frequently, posting new projects, audition calls for classroom scenes, independent-off campus films, and more.

“I utilized Brooklyn Backstage to circulate a call for actors, directors, designers, and playwrights to participate,” said Associate Undergraduate Deputy Chair Manual Simons, who used it to create last semester’s 24-Hour Play Festival. “Because of Brooklyn Backstage we were able to involve artists in the festival who came from not only inside, but outside the Department of Theater.”

Some students have been able to use the program to get roles in projects in the department.  “I was able to get a directing gig for the 24-Hour Play Festival last semester, where I directed two short plays,” said Colleen Morgen, a senior in the theater program.

Morgen says she first learned of Brooklyn Backstage through an email that went out to students last year, and the ongoing pandemic has prevented her from doing any in-person projects, but she is hopeful that Brooklyn Backstage will help her with finding more projects in the future.

Access to the website is granted only to students in the Theater and Film Departments, and all students must request access through Sabongui, who monitors the students allowed into the community of artists.

With the site’s growing success, Sabongui gives credit to resources such as Backstage.com and all other theater and film community boards throughout the industry. His idea was that mimicry is the best form of compliment, which prompted him to call upon these platforms for inspiration.

“The actors in [the] ensemble BFA want to work more with people outside of the program,” said Sabongui.

Being able to find a project without the authority of faculty direction was very important to Sabongui, as he felt the students needed to be able to navigate jobs and work without impediment from administrators.

Going forward, Brooklyn Backstage will continue to serve active students. It is currently unknown whether or not alumni will be granted access to the site post-graduation.

Since the website launched in October 2020, many independent and student-run projects have started, as Sabongui and Simons have encouraged students to be active users.

“The site has helped us strengthen connections with students in our department and build community across departments,” said Simons. “The more artists who use Brooklyn Backstage, the better of a resource it becomes for the entire artistic community at BC.”